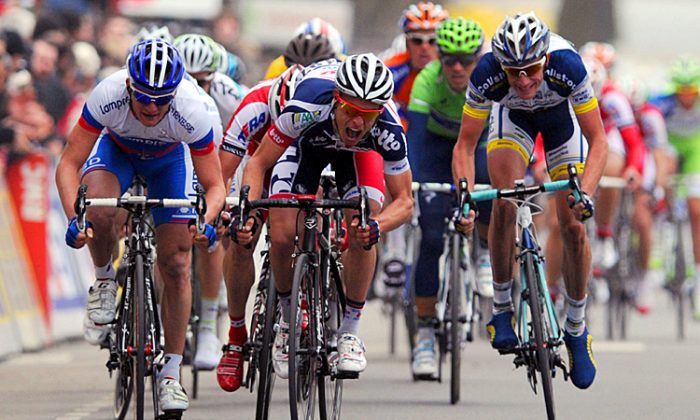 “I was third yesterday, and today the team worked all day. That gave me confidence and I’m really glad there was a victory,” Meersman told cyclingnews.com. “Today I was fast but I’m just happy I could win, and I’m happy with the victory.

“We had a little roundabout with roughly 200 meters to go and I was in fifth position. I thought I was too far back and I was waiting and waiting and then I sprinted.”

Stage Four, 183 km from Brvie La Gaillarde to Rodez, featured five categorized climbs, but nothing even mildly troubling to the leaders, though some riders who were not on form or suffering illnesses (bronchitis and stomach flu seem to be common) fell off the back.

An early five-rider break lasted until 20 km from the finish line. Seven km later, Vacansoleil’s Thomas de Gendt launched a late charge, trying to capture King of the Mountains points; he stayed away for six or seven kilometers but faded.

Andreas Klöden of RadioShack-Nissan, who lost his chance at an overall win when he missed the break in Stage Two, took a shot at a stage win, attacking three km from the line, but he was swallowed up in the final kilometer.

Movistar, led by José Joaquin Rojas, set a huge pace over the final few kilometers, perhaps hoping to tire the pure sprinters and give Valverde a shot at a second stage win and the bonus points, but the field hung tough.

Lampre’s Greg Bole started the sprint, but Gianni Meersman, who finished third in yesterday’s uphill sprint, got his timing right today and pulled ahead in the final 50 meters to take the stage.

GC is unchanged with Wiggins leading Levi Leipheimer by six seconds and Tejay Van Garderen by 11.

Stage Five, 178 km from Onet-le-Château to Mende, is the first really steep stage of the race, with six categorized climbs including a 3-km, 10-percent-grade mountaintop finish. This stage offers the best chance for Wiggins’ rivals to gain a few seconds back.

It is a tough choice. The way Wiggins is riding, it could be equally dangerous to burn out one’s legs attacking futilely in Stage Five as to gamble everything on the Stage Eight uphill time trial.