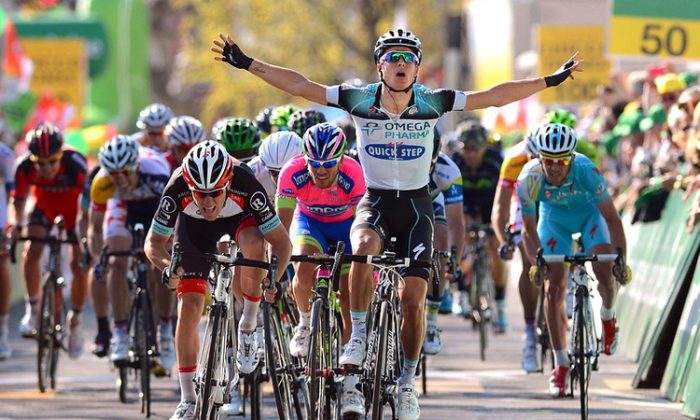 Omega Pharma-Quickstep’s Gianni Meersman won Stage One of the 2013 Tour of Romandie after hauling himself over three categorized climbs including a Cat Two ascent, which claimed a lot of sprinters. Meersman made it, and outpowered the remaining riders across the line after 177 km (110 miles) of riding.

“It was a hard stage,” the Omega rider admitted to Skysports.com afterward. “The team worked perfectly, but in the final 500 meters I had to brake a little bit but then I found my good legs, I saw a way to the victory and I am glad that I won.”

Omega’s main sprinter is Mark Cavendish, the “Manx Missile” and arguably the fastest cyclist in the world, but Cavendish couldn’t keep up on the final Cat Two climb, Col du Mollendruz.

“The goal was if Mark [Cavendish] was still there after the last climb it was for Mark; if he wasn’t there it was for me so I took my chance and I won,” Meersman explained. His goal for the rest of the race was “to win another stage, tomorrow or the day after,” he said.

The General Classification remained unchanged: Sky’s Chris Froome maintained the yellow jersey and the six-second advantage he had captured with his amazing time trial in the Prologue the day before, and Garmin-Sharp’s Andrew Talansky preserved his 13- second lead, earned with a similarly amazing ride. RadioSahack;’s Robert Kiserlovski was third, two seconds back.

The day began with a three-man break from the start: Julien Bérard (Ag2R,) Garikoitz Bravo (Euskaltel,) and David Veilleux (Europcar) stayed clear for 125 km before being caught on the slopes of the Col du Mollendruz.

Sky had been controlling the peloton, but once they reached the final ascent, Movistar and Argos came to the front and raised the pace, determined to tire the strongest sprinters.

Shortly after the break was caught, Europcar’s Pierre Roland and Ag2R’s Hubert Dupont attacked; they were caught within five kilometers. Things stayed calm for a few dozen kilometers, when FDJ’s Jeremy Roi and IAM’s Mathias Brändle tried an attack. Cannondale’s Moreno Moser tired to follow, but never managed to catch the two leaders.

With 17 km to go, Orica-GreenEdge sprinter Matt Goss finally caught up to the peloton; once he got there, his teammates took over the chase, giving Sky a break.

Roland and Dupont didn’t make it to the finish; the sprinters’ teams ran them down five kilometers from the line, but then could not organize themselves to protect the sprinters. Saxo Bank’s Manuele Boaro tried to take advantage of the chaos by attacking 2,400 meters (1.5 miles) out, but he couldn’t match the pace of the peloton, then led by Argos. He was caught 1,500 meters out, as Omega’s Tony martin took the lead.

The Omega team tried hard to get Meersman to the front for the sprint, using Tony Martin to raise the pace through the final kilometer, but no team could establish control. BMC got a rider in front of their sprinter, Adam Blythe, but lost him at 400 meters.

Argos managed to get a leadout man in front of their sprinter Reinhardt Van Rensburg while Cannondale, riding for Elia Viviani, and Orica-GreenEdge, for Matt Goss, all battled for supremacy.

Position is everything in an unorganized sprint and for the next hundred meters Rensburg, Blythe, Meersman, Goss, and Lampre’s Roberto Ferrari all fought for position. Rensburg followed his leadout down the middle of the road with Sky’s Chris Sutton on his wheel, with RadioShack Leopard-Trek’s Giacomo Nizzolo on his left shoulder. Meersman was coming up behind Nizzolo with Ferrari on his wheel while Elia Viviani moved down the far right.

Rensburg started his sprint just past the 300-meter sign; when Rensburg took off, Meersman did also, moving around Nizzolo on the left. Ferrari tried to follow but was briefly balked while Meersman surged into the lead and crossed the line a few inches clear of the RadioShack rider. Ferrari had to settle for third.

Stage Two, 190 km from Prilly/Ouest lausannois to Granges, has a pair of categorized climbs, a Cat Two halfway through and a Cat Three 20 kilometers from the finish. The day should end with another sprint, but possibly this time the pure sprinters will have time to recover from the first hill and will be able to make it over the second in shape to contest the win.