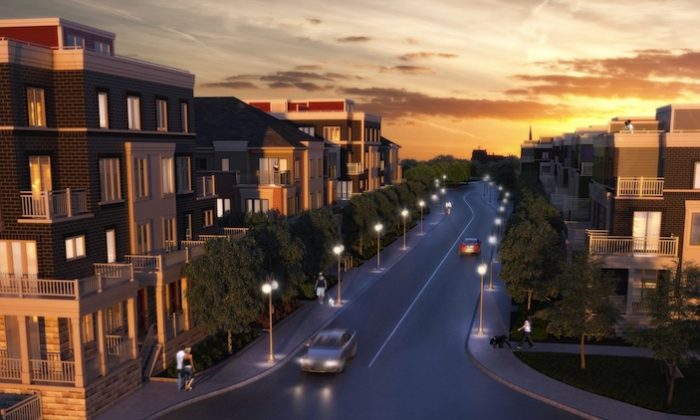 Medium Density All About the Town

High-rise prices are flat but units are still shrinking. Regular people are priced out of single-family homes but are not yet ready to live in shoeboxes. The GTA needed some middle ground. Welcome to the era of the townhouse.

It’s not really news to people selling land. According to Realnet’s Q3 numbers, anything zoned for medium density is rising in price the fastest—even faster than land zoned for single family homes.

As one of Ontario’s largest builders, Minto Group does everything from developing single-family homes and high-rises, to residential and commercial rental.

What they are doing a lot of now is building townhouses—all manner of townhouses.

In fact, of the 12 active (or recently sold out) projects Minto has in and around the GTA, seven are either all townhouses, or contain some townhouses.

Minto’s Longbranch development of stacked townhomes sold 200 units in a single month, but not to investors. According to Vince Santino, VP development for Minto, end-users were the predominant purchaser.

End-users like variety, which is resulting in an increased selection in all things four-storey.

There are traditional townhouses with back yards, terrace towns with rooftop patios, urban towns with little more than a balcony, stack towns with upper and lower units, and my personal favourite—ultra-modern townhouses with their chic lines and minimalist, open layouts that in no way remind me of the townhouse I grew up in.

A new dimension may soon be added. Bill 13 is making its way through the Ontario legislature, which would allow for six-storey wood frame residential buildings in Ontario.

It turns out that six-storey townhomes are cheaper to build in wood, and wood is counter-intuitively easier on the environment than concrete, leaving a smaller carbon footprint.

This is the second time Bill 13 has made the rounds. Last year it was called Bill 52 and it bit the dust in the same place Bill 13 is now—after its second reading on its way to committee.

Santino jokes he’s “not afraid” of building two storeys higher in wood, in part because Minto appears readier than most.

“I think we’re the leading edge in terms of mid-rise four-storey wood frame,” he said. Two more storeys may not be much of a stretch, or so you’d think.

But what will these new buildings look like? Supersized townhomes? Well… no.

“They would be apartment-style,” Pieper said. The two extra floors create a need for elevators, underground parking, storage lockers and more. Pieper figures buyers will want shared amenities too.

“You’d have to be clever in how you design and market a building like that,” she explained. These additions may cancel out the savings of building in wood above four storeys.

In Vancouver, where the first six-storey wood frame condos were delivered last year, units are selling for between $50-$70 per square foot less than their concrete counterparts.

“Here we couldn’t get as aggressive as the Vancouver market,” Pieper speculates, confirmed by BILD which estimates the savings in Ontario around the $30-$40 per square foot mark.

I’ll take mine in green (at a discount)

Ontario’s green legislation requires an increase in density around transit hubs, and medium-density housing is a sensitive way to fill in existing communities.

When existing industrial land in the city is rezoned for residential it is called a brownfield. These sites come with government incentives for builders.

Minto’s Longbranch project is the company’s third in the area on a brownfields site. “We’ve understood what it takes to remediate a site,” explained Santino. Building medium-density on urban brownfields sites is definitely on his agenda.

What Santino feels Minto has mastered is how to build a significantly greener townhome that is still affordable.

“We do a green plan for each one of our developments that everybody looks at. The objective is to push the envelope. It’s well thought out,” Santino said.

But he feels the key driver for Southshore and Longbranch was price. Southshore started around $200 per square ftoot, Longbranch around $340.