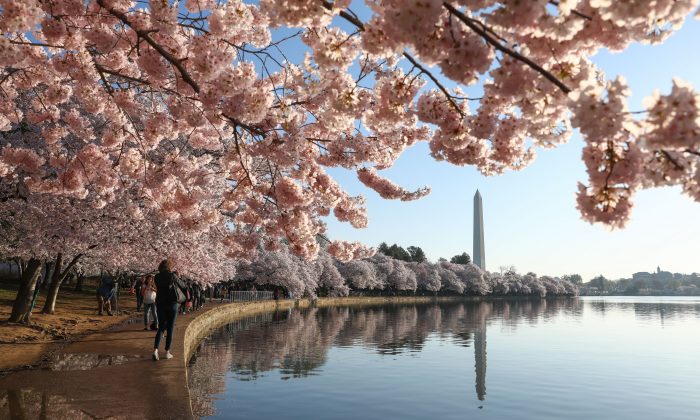 Cherry Blossom trees are in full bloom at the Tidal Basin in Washington on April 3, 2019. (Samira Bouaou/The Epoch Times)
Viewpoints

Meditations in a Political Toolshed

In the summer of 1945, C.S. Lewis published a little essay in which he told the reader about an experience of entering a dark toolshed. From the crack at the top of the door, he recounts, a sunbeam came streaming into the shed. Dust particles floated in the beam and compared to its brightness, everything else in the shed was dark and uninteresting.

Then, Lewis recounts turning his eye into the beam. Suddenly, the beam (as a beam) vanished, as did the shed and the dust, and everything that had previously caught his eye. Now, looking along the beam, he saw, through the crack at the top of the door, green leaves and a tree outside the shed, and finally the sun itself, some 90 million miles away.

Lewis then went on—perhaps he thought this was a more universal example his readers could grasp—to talk about a boy who had fallen in love. To him, the girl was everything and the whole world looked different because she was in it.

But then, along came the scientist who would examine the boy’s experience from the outside and would explain it away as merely biological stimuli.

There is a profound difference between looking along something and looking at it, Lewis wanted us to realize.

In this way, Lewis was calling his readers’ attention to a phenomenon that is, perhaps, as old as humanity, but which, he believed, had acutely become a problem in the 20th century. It’s a problem that we suffer from even more acutely in the age of social media and political division—we tend to look at people and their views rather than looking along them.

With the rise of the modern academy, Lewis notes, we have come to dismiss actual lived experiences and the ideas of real human beings. We turn to professors of theology to explain religious views to us—or, perhaps worse, to psychologists. We turn to sociology professors to explain to us what chivalry meant or what it means to be a woman in this or that society, or to political scientists to tell us why people vote the way they do.

Looking along the sunbeam of people’s actual experiences and the formation of their ideas allows us to take those experiences seriously and, what is even more important, to take the actual people themselves seriously as being worthy of having their own ideas, values, traditions, and experiences.

Looking along other people’s experiences allows us to treat them as full human beings, and their ideas can be held to be worthy of rational discussion.

On the other hand, merely looking at the “other” allows us to dismiss them and their ideas. And this, the “outside” point of view, has come to be seen as the only authoritative perspective. As our scientists have come along to explain away so much of life as mere chemical reactions or psychological necessity, their activist associates on campus dismiss the rest as “merely a social construct,” or “the result of white privilege,” or “an example of injustice inherent in the system,” or a remnant of the “cisgendered normative” worldview.

This prevalence of looking at others and thereby being able to dismantle them into parts that can be used, in turn, to explain away and dismiss the whole, has come to infect our political and social media world beyond the campus. As our nation has fractured politically, we are losing the ability to empathize with those whose experiences are not our own.

We see a private school boy and a Native American and immediately assume the narrative. We see a gay African American actor claim to have been attacked by Trump supporters and we assume we know what happened. We see a southern boy with a rebel flag on his truck and we assume the worst motives. We see a supporter of legalized marijuana and assume their habits. We see people with political views we disagree with and explain both their ideas and their humanity away by assuming their motive.

To the degree that social media encourages us to look at others and treat that perspective as the only one to be considered, it has contributed to the breaking of our politics. We must, as Lewis said, “on the pain of idiocy,” deny that “looking at” is intrinsically more true or better than “looking along.” Today, we must also deny that “tweeting at” is the equivalent of dialogue, discussion, or understanding.

If we are to repair the worst aspects of today’s social-media politics, we should start by not just looking at others but attempting to look along their experiences as well. That requires us to do the harder work of taking ideas seriously and treating the experience, values, and beliefs of others as being worthy of actual consideration and respect, rather than reflexively dismissing them with jargon-laced hostility or the dismissive shrug.