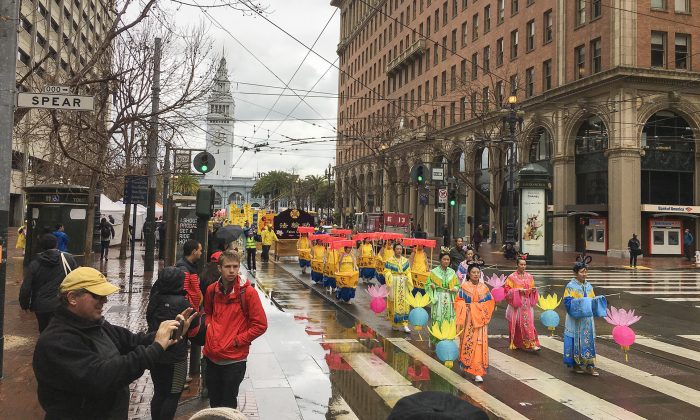 The Tianguo marching band led the parade starting at the Embarcadero and Ferry Building. Next was the dragon dance followed by a group of heavenly maidens, a group demonstrating Falun Dafa’s qigong exercises, a variety of China’s different folk and ethnic groups, and vivid banners. They all made their way through downtown San Francisco on Feb. 9, ending up at Portsmouth Square.

Kerry Huang, the event coordinator, explained that Falun Dafa practitioners were hosting this parade because they want to make sure that traditional Chinese culture is not lost overseas among the Chinese diaspora, as it has been attacked and much of it destroyed in modern China.

“Back in ancient times, Nian was a monster that caused destruction to humanity,” she said. “So lighting firecrackers and welcoming the New Year was a way to rid of the evil. It’s not just a celebration, but also to get rid of evil.”

“I was impressed by the number of colors and music and participation of the people,” Stefano Bonora said while on a visit from Padua, Italy. “And [it is] a rainy day, but there was a lot of people taking part of it. It was amazing.”

“I like watching parades,” Mr. Zhang, an elderly resident of San Francisco’s Chinatown for over 50 years, said. “There’s everything. There’s even the Monkey King and Pigsy.”

David Huang, a Falun Dafa practitioner who portrayed the Monkey King from a Chinese classic, Journey to the West, explained the significance of his character.

“He was born from a rock and later on he became a bodyguard to escort the Tang monk to go to India to get the Buddhist scriptures back to China,” Huang said. “He has a fire eye to help him distinguish false from truth. He also has very strong supernormal abilities. He can defeat demons, he can change his forms into 72 different forms. He’s also very loyal to Tang monk over the journey. And eventually, he finished his task and became the Buddha.”

“It’s so colorful and pretty,” another visitor April Hatada said. “I’m glad they have things like this so that everybody can still see traditional costuming and music.”

Guided by age-old traditions, Huang said that the beauty of the Falun Dafa parade was a great celebration of the New Year bringing blessings to San Francisco residents.

Falun Dafa, also known as Falun Gong, is a peaceful meditation practice that consists of five sets exercises. Based on its teachings, practitioners live by Truthfulness, Compassion, and Tolerance in their everyday lives.

“Falun Dafa has benefited me personally both spiritually and … honestly had a lot of physical calming benefits,” Kuan-Yu Hsiao, a practitioner since she was five years old, said. “The meditation exercises are calming enough that they aren’t tough on your body. We often, I think, try to push our bodies to the physical limit. But there’s also this spiritual, kind of mindfulness part that we don’t often take care of, so it’s beautiful that way.”

Dan Ngo has been a Falun Dafa practitioner for two years and said it has changed his life. His family of five are also practicing.

The practice was first introduced in 1992 by Li Hongzhi in China. In a few years, millions across the country were practicing. However, starting 1999, the Chinese Communist Party (CCP) became afraid of the growing number of Chinese who practiced Falun Dafa and started to persecute them.

Many were tortured to death or have had their organs harvested while they are still alive, all because their spiritual belief was banned by the CCP. Those who have been able to flee the country have been able to freely continue with their spiritual practice overseas. They have also been the only way the outside world has come to know of the barbaric genocide is happening to Falun Dafa practitioners in communist China.

But even overseas, the murderous CCP still attempts to persecute the practice in different ways.

Due to pressure from the CCP, the Chinese Chamber of Commerce banned the meditation group from participating in the city’s annual Chinese New Year parade in 2005. Since then, they have not been able to participate. Therefore, practitioners from around the Bay Area put on their own parade each year to celebrate with the locals and let the CCP know that Falun Dafa still thrives.

Antonio Gonzalez, a parade spectator from Spain, was sad to hear that even overseas, the group is still being discriminated against due to CCP pressure.

“The important point is that they can do it. As they can do it, I’m happy for them. They can express freely, their thoughts,” he said. “I think it’s better to have a good conscience than just to be craving for money.”

Michael Adams, a viewer passing by, said, “People should be free to pursue higher meaning in life.”