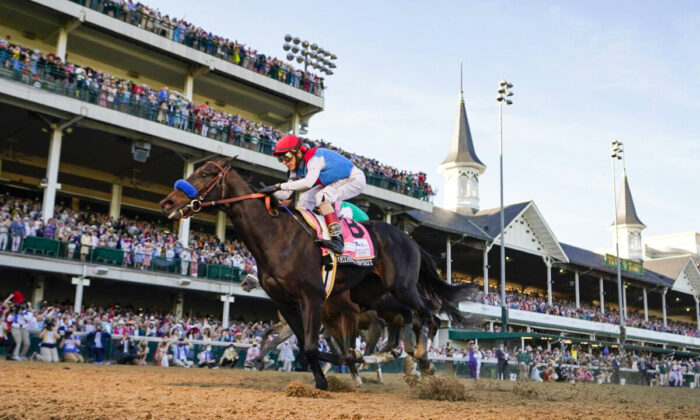 John Velazquez riding Medina Spirit crosses the finish line to win the 147th running of the Kentucky Derby at Churchill Downs in Louisville, Ky., on May 1, 2021. (Jeff Roberson/AP Photo)
Sports

Medina Spirit was stripped of the victory in last year’s Kentucky Derby and Mandaloun was declared the winner after a ruling by state racing stewards on Monday.

The since-deceased Medina Spirit tested positive after the race last May for a steroid, betamethasone, that is legal in Kentucky but banned on race day.

Medina Spirit finished half a length ahead of Mandaloun in the race, giving trainer Bob Baffert what was then his seventh Kentucky Derby title. Baffert was subsequently banned for two years by Churchill Downs following the positive test.

Monday’s decision by the Kentucky Horse Racing Commission makes Medina Spirit the second horse in the 147-year history of the race to be disqualified for a banned substance; the first was Dancer’s Image in 1968, a decision that gave Forward Pass the victory. The only other disqualification was in 2019 when Maximum Security was penalized because of interference.

Following the announcement by the racing stewards, Churchill Downs issued a statement declaring Mandaloun the Kentucky Derby winner and congratulating owner and breeder Juddmonte Farms, trainer Brad Cox, and jockey Florent Geroux. Cox becomes the first Louisville native to win the most famous race in the sport, and Mandaloun’s owners will receive the $1.8 million winner’s purse.

“We look forward to celebrating Mandaloun on a future date in a way that is fitting of this rare distinction,” the statement said.

The track plans to replace Medina Spirit with Mandaloun on the paddock sign honoring the Derby winner on Tuesday.

The racing commission also suspended Baffert for 90 days and fined him $7,500 on Monday. The decision followed a Feb. 14 hearing that was closed to the public and media.

Clark Brewster, an attorney for Baffert, said he would appeal the ruling.

“This ruling represents an egregious departure from both the facts and the law,” Brewster said, “but the numerous public statements by KHRC officials over the last several months have made perfectly clear that Bob Baffert’s fate was decided before we ever sat down for a hearing before the three stewards, one of whom is directly employed by Churchill Downs as the racing director at Turfway Park.”

Medina Spirit collapsed and died on Dec. 6 of a heart attack following a training run at Santa Anita less than a month after finishing second in the Breeders’ Cup Classic at Del Mar. A necropsy found no definitive cause of the horse’s death.

Baffert, a Hall of Fame trainer, initially denied wrongdoing after a postrace drug test revealed 21 picograms of betamethasone in the horse’s system. Baffert later acknowledged treating the horse with a topical ointment containing the corticosteroid for a skin inflammation.

Churchill Downs subsequently suspended Baffert, citing a recent spate of failed drug tests by his horses. Baffert sued the racing commission last June, seeking custody of remnant samples of Medina Spirit’s blood and urine for subsequent testing to prove that the steroid did not come from an injection.

Another Baffert attorney, Craig Robertson, said in December that a urine test from a split sample showed the steroid came from an ointment.