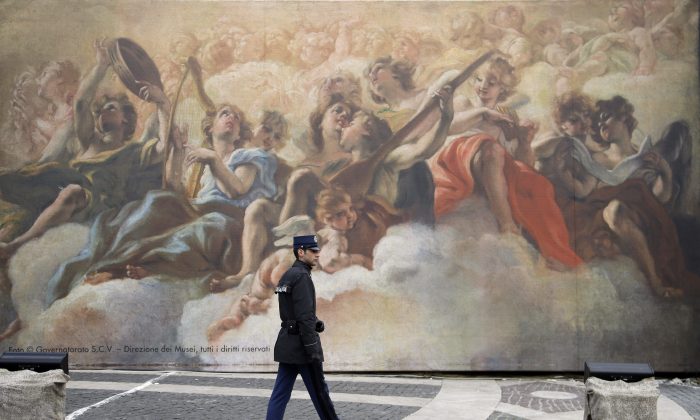 A gendarme from the Vatican security forces patrols St. Peter’s Square at the Vatican on Jan. 25, 2015. (AP Photo/Gregorio Borgia)
Canada

VANCOUVER—The University of British Columbia has obtained a 770-year-old religious document that its professors say will be an invaluable resource for students and teachers.

The handwritten decree on parchment was issued by Pope Innocent IV to affirm the rights of the San Michele monastery in Trent, Italy.

The so-called papal bull document is believed to be the oldest of its kind in Canada. Included with the 62-by-58-centimetre document, made from sheep or calf skin, is the pope’s lead seal, or “bulla” in Latin, the reason it’s called a papal bull.

Access to such documents is normally tightly restricted, but this decree will be available to anyone who wants to study it.

“I’m going to use it in all my classes on the European Middle Ages,” said UBC history instructor Richard Pollard. “This is the foundational Western document. It’s a wonderful illustration of papal power in the 13th century.”

I’m going to use it in all my classes on the European Middle Ages.
— UBC history instructor Richard Pollard

Legal scholars will find it useful for what it can tell them about early legal traditions, while library science professors and students will learn about document production and preservation from examining the decree, he said.

Its text was written by hand in an ornate, precise writing font called papal chancery minuscule with a quill pen. It’s signed by Pope Innocent IV and 13 witnesses, one of them a future pope, Nicholas III.

The document has just been unveiled now because when it arrived last summer, it was folded, and had been for centuries. That required gently flattening it using a humidification chamber to relax and uncrease it, Kalsbeek said.

Many of these types of documents are in Europe, and the few in North America are in collections like New York’s Morgan Library and Museum, where people have to apply to see them.

Josh Timmermann, a master’s history student at the library who examined the papal bull in person, said few people actually get permission to see such documents.

“For undergraduates who are accustomed to reading about the Middle Ages in a textbook, they can have this direct, unmediated contact with the medieval past that they couldn’t have otherwise.”