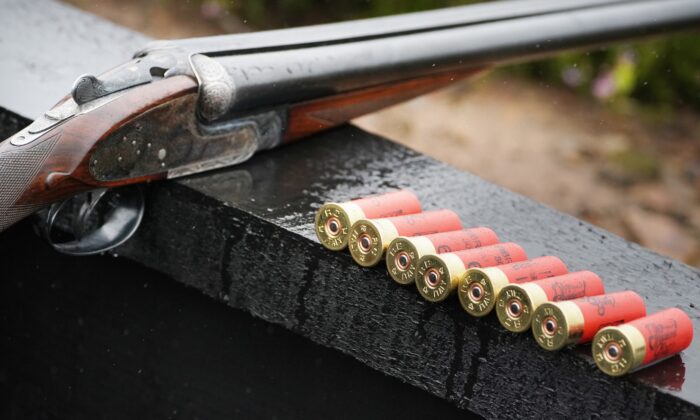 A shotgun and cartridges on a moor near Ripon, North Yorkshire, England, on Aug. 12, 2019. (Owen Humphreys/PA)
UK

Police will have to check someone’s medical history before issuing a gun licence in the wake of the mass shooting in Plymouth, the UK Government has confirmed.

From Nov. 1, all firearms applications must be accompanied by a medical document signed by a registered, practising doctor, the Home Office said.

New statutory guidance published on Wednesday sets out how any relevant health records—particularly any information on mental health, neurological conditions, and substance abuse—will have to be reviewed as part of the process.

It means police, for the first time, will be legally required to follow the guidance to help improve standards and consistency across forces in the UK.

Police have also been told to review an applicant’s social media accounts and financial history as well as carry out domestic violence checks in cases where officers believe more evidence is needed before authorizing a licence.

The Home Office said: “Background checks which can be conducted by the police are already extensive, spanning everything from criminal convictions and previous run-ins with the law, to evidence of domestic turmoil, un-managed debt, or even dishonesty.

“Existing laws also require a home visit by the police for first-time applicants, to ensure they have utmost confidence in an individual’s suitability to own a gun with no risk to public. Two credible referees for a firearm and one for a shotgun must be provided before a licence can be issued.”

Jake Davison, 22, killed five people in the Keyham area of the Devon port city earlier this year before turning the gun on himself.

The apprentice crane operator had received mental health support during the COVID-19 lockdown from a local telephone helpline.

His social media usage suggested an obsession with “incel” culture, meaning “involuntary celibate,” as well as an interest in guns.

Questions remain over how he was permitted to have a firearms licence.

The Independent Office for Police Conduct (IOPC) is investigating the decision by the Devon and Cornwall force to return Davison’s shotgun certificate and weapon to him.

They had been seized in December last year following an assault allegation the previous September and were returned to him in July.

Although the UK has some of the toughest firearms laws in the world, Home Secretary Priti Patel said “we must never become complacent about these high standards,” adding, “This new guidance prioritizes public safety above all else and we have taken considerable care to ensure it is comprehensive and enforceable, having worked closely with the medical, policing, and shooting sectors.”

The British Medical Association, which helped develop the guidance, said it makes clear doctors are responsible for providing medical evidence but the police force will make the final decision on issuing the licence.

The organisation’s Dr. Mark Sanford-Wood said, “As doctors we support the Government’s overall message—that gun ownership is a privilege and not a right—and that firearms must be in the hands of only those who are deemed safe and responsible.”

Debbie Tedds, the Chief Constable for Warwickshire Police who leads the National Police Chiefs’ Councils’ work on firearms licensing, welcomed the guidance and said, “Policing take this matter incredibly seriously and any advancement on the already extensive checks will help to ensure that only those who are safe to carry a firearms licence will receive one.”

The British Association for Shooting and Conservation (BASC) said while the guidance “will allow applicants to choose who completes their medical verification if their GP states they are opposed to shooting or insists on excessive fees,” they warned that “flaws remain” in the process and urged the Government to “listen again to those who want a pragmatic, cost-efficient licensing system that is fit for purpose.”