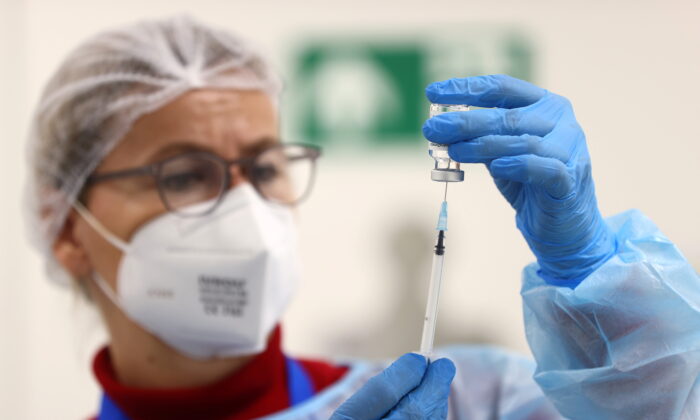 An AstraZeneca COVID-19 vaccine is prepared at the local vaccination centre as the spread of the coronavirus disease (COVID-19) continues in Hagen, Germany, on March 19, 2021. (Kai Pfaffenbach/Reuters)
WORLD

The CEO of a major medical equipment maker said that those who refused to get a COVID-19 vaccine should be “automatically considered” to have forfeited the right to obtain COVID-19 treatment in a public hospital.

Stefan Dräger, the CEO of major German medical manufacturer Dräger, told Die Welt that those who reject getting a shot for the CCP (Chinese Communist Party) virus should not be able to get publicly funded hospital treatment for the disease. Dräger is considered one of the largest makers of ventilators in the world.

“Anyone who refuses vaccination must forgo treatment in the hospital,” he said, reported other German media citing Welt, according to a German-to-English translation. “If he refuses, this is automatically considered a patient decree that if he falls ill with the virus, he will not be treated in hospital at the expense of the general public,” Dräger also said in the interview, published Thursday.

His argument for such a protocol, which is sure to draw criticism, is because it “avoids overburdening hospitals and staff,” he added.

The German CEO also stated: “What bothers me about mandatory vaccination is that the state then makes the decision for the people and relieves them of their responsibility.

“In my opinion, a large, silent majority in our country is currently suffering from an unrepentant minority,” Dräger continued. “I also mean this in a medical sense, for example [since] the treatment of other illnesses or operations has to be postponed.”

A number of European countries in recent days have moved to rescind some COVID-19 rules, including vaccine passports, amid falling case numbers. However, Germany and neighboring Austria have instead opted to implement more restrictions.

The German government is reportedly considering a general vaccine mandate for everyone aged 18 and older.

German Chancellor Olaf Scholz, who replaced longtime former Chancellor Angela Merkel, told news outlets in January that supports the idea of a general vaccine mandate by saying: “I’m convinced now that without compulsory vaccination, we won’t be able to get the vaccination rates up to the level needed to get us out of the pandemic.”

The Austrian Parliament passed a similar measure and its president signed it into law earlier in February. Harsh fines of thousands of euros could be levied several times per year on individuals who refuse to comply.

On Friday, a top German court rejected a legal challenge to temporarily block the implementation of a CCP virus mandate for health care workers scheduled to be enforced in March. The move was welcomed by the German government.

Scholz has said that because he and health officials believe COVID-19 cases will rise in the fall and winter of 2022, it’s necessary to make vaccines compulsory. During a speech to Parliament on Friday, he reiterated his stance.

“Because the next fall and winter will again see a rise in infections the universal vaccinate mandate also makes sense,” the chancellor said.