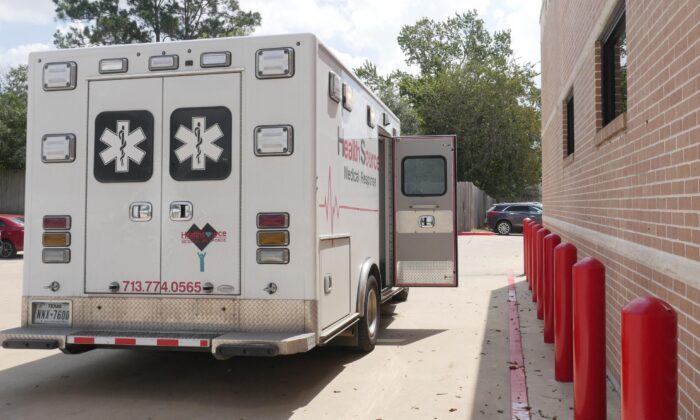 An ambulance is parked outside the Bellville Medical Center after dropping off a patient, in Bellville, Texas, on Sept. 1, 2021. (Francois Picard/AFP via Getty Images)
Texas

The Texas Medical Board temporarily suspended Dr. Raynaldo Rivera Ortiz Jr., an anesthesiologist, on Sept. 9 after it determined that the physician’s continued medical practice poses a threat to the welfare of the public.

According to the suspension order (pdf), the criminal investigation into Ortiz stems from his actions at the Surgicare facility between May and September 2022. Surveillance cameras at the facility recorded Ortiz depositing single IV bags into the warmer in the hall outside operating rooms.

On June 21, a physician from the facility who was ill took one of these IV bags home to rehydrate herself. After inserting the IV into her vein, the physician immediately contracted a serious cardiac event and died, according to the suspension order.

The autopsy report concluded that the physician’s death was caused by accidental bupivacaine toxicity. Bupivacaine is used to numb an area of a person’s body following surgery or other medical procedures like dental work or childbirth.

Lab tests on the IV bags taken from the warmer showed that they had tiny holes in the plastic wrap around them. These allegedly tampered bags contained bupivacaine. However, they were not labeled as such.

A healthy patient at the facility was also given an IV bag. The individual subsequently had a serious cardiac event during a routine surgery. Tests suggested that the fluid in the bag contained similar drugs.

Around Sept. 2, staff at the Texas Medical Board became aware of the death of the physician under questionable circumstances through news and social media. On Sept. 9, a temporary suspension hearing was scheduled, with the disciplinary panel eventually suspending Ortiz without notice.

A temporary suspension hearing with notice will be held as soon “as practicable” once Ortiz is informed, the board stated in the release. The suspension will remain in effect until the board takes any further action.

Ortiz was found to have violated various sections of the Medical Practice Act and the Board Rules, including those related to failure to practice medicine in an acceptable professional manner; unprofessional or dishonorable conduct; and tampering with a consumer product causing serious bodily injury or death.

Ortiz received his physician license to practice medicine in Texas in 1991. Though the doctor lists his specialty as anesthesiology, he is not certified by the board. Ortiz is not licensed in any other U.S. state.