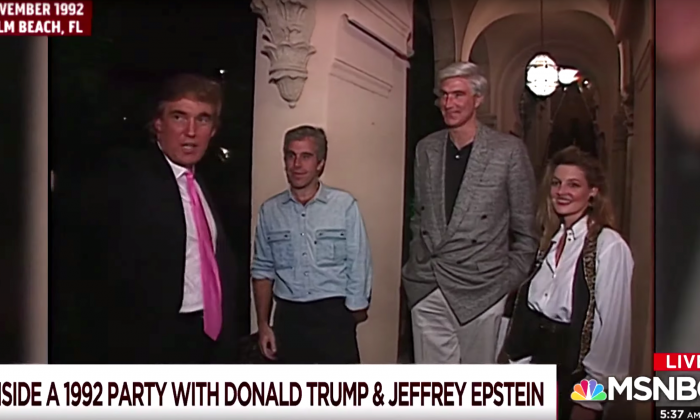 A screenshot of a video taken by NBC News in 1992 shows Donald Trump welcoming several guests, including Jeffrey Epstein, to a party at his Mar-a-Lago resort in Palm Beach, Fla. Trump would later ban Epstein from the resort. (Screenshot/NBC)
US News

Following the arrest of Jeffrey Epstein on charges of molesting underage girls and sex trafficking children, media organizations have tried to tie him to President Donald Trump.

On July 17, MSNBC’s “Morning Joe” program aired footage showing Trump at a party with Epstein. The footage had previously been aired by NBC News during the presidential election race in 2016.

Following the Morning Joe report, a number of other media, including The New York Times, The Washington Post, and CNN, also reported on the video.

What Does the Video Show?

The footage, taken nearly 27 years ago—shot before Trump converted the Mar-a-Lago resort in Palm Beach, Florida, into a club—shows a party that featured the Buffalo Bills cheerleaders.

The video also shows Trump greeting four guests (not three as MSNBC reported), one of whom is Jeffrey Epstein.

In the video, Trump is seen chatting alternatively with Epstein and another, unidentified man. At several points, Epstein appears to turn to respond to Trump, only to find him engaged with the other man. But the two do appear friendly, with Epstein doubling over in laughter at one point from something Trump said.

But that quick summation fails to place the story into its proper context and timing.

Trump had known Epstein, who owns a house in Palm Beach, socially for years. At some point, however, the two had a falling out after Trump became aware of inappropriate behavior on Epstein’s part, leading Trump to ban Epstein from Mar-a-Lago.

Epstein wouldn’t face accusations of statutory rape and sexual abuse until 2005—13 years after the video had been recorded.

Epstein was indicted in 2007 on charges he abused underage girls, but reached a controversial plea deal in which he served only 13 months at a low-security facility that allowed him to work from his office each day.

This month, Epstein was charged with sex trafficking of minors and conspiracy to commit sex trafficking that may lead to him spending the rest of his life in prison. Justice Department officials have indicated that they expect the charges against Epstein to expand as they delve further into the case.

Some of Epstein’s accusers have told the Miami Herald that Epstein’s abusive actions began a year earlier, in 2001. Although future allegations may surface, there are no known official allegations against Epstein prior to 2001.

Fifteen years ago would place Trump’s severing of relations with Epstein somewhere in 2004. The public allegations against Epstein, and the subsequent investigation began in 2005.

Best-selling author James Patterson, who wrote a book on Epstein, titled “Filthy Rich,” has stated that Trump banned Epstein from Mar-a-Lago. In a recent interview on Fox News, Patterson said: “There were some complaints about Epstein at Mar-a-Lago. I spoke to the head of the spa there. … She said she went to Trump, and he threw [Epstein] out of the club.”

A similar version of events was reported in a December 2018 article by The Washington Post, which noted that Trump had permanently banned Epstein from Mar-a-Lago “because Epstein sexually assaulted an underage girl at the club,” according to court documents filed by Bradley Edwards, who has represented many of Epstein’s underage accusers in civil suits against him.

The Washington Post article also noted that all sides agreed that Trump’s involvement in the Epstein case was only tangential and wouldn’t even require his testimony:

“Lawyers involved with the various Epstein cases said there is virtually no chance that the president will be required to testify in a matter in which both sides agree his involvement was tangential.”

In other words, nothing in the 1992 footage disproves anything that Trump has said about his relationship with Epstein.

Notably, at the time the 1992 footage was taken, Epstein hadn’t yet purchased his infamous island retreat in the Virgin Islands. Actually, Epstein has not one, but two, private islands. The more well-known is the 75-acre Little St. James Island, which Epstein purchased in 1998 for $7.95 million, before putting millions more into renovations and upgrades. The second island, the 165-acre Great St. James Island, was purchased in 2016, reportedly for $18 million.

Attempts to make damning connections between Epstein and Trump from a 1992 video may ultimately prove to be problematic for the media. since Epstein’s ties appear to fall primarily in Democrat circles.

According to OpenSecrets–the Center for Responsive Politics, Epstein donated more than $139,000 to Democratic federal candidates and committees from 1989 to 2004, while giving roughly $18,000 to Republican candidates and groups during the same period.

Hillary Clinton was one of the biggest recipients of Epstein’s contributions, receiving $20,000 from Epstein in 1999 during her Senate campaign. According to ABC News, Senate Minority Leader Chuck Schumer (D-N.Y.) “received approximately $22,000 from Epstein through his House and Senate campaigns and other affiliated joint fundraising committees between 1992 and 1999.”

The contributions came to an abrupt halt during the investigation into allegations of Epstein’s sexual exploitation of underage girls, but they resumed in 2016, with all $8,100 in donations going to Democrats.

Clinton Activities at Time of 1992 Video

At the same time that Trump was pictured with Epstein in 1992, Bill Clinton was making news of his own. In January of 1992, shortly after announcing his candidacy for president, Gennifer Flowers alleged that she had a 12-year affair with then-Gov. Clinton.

Two months later, on March 8, 1992, The New York Times broke the story on the Clintons’ “Whitewater” partnership with the McDougals. On March 20, 1992, The Washington Times disclosed that Hillary Clinton had been placed on a $2,000-per-month retainer with Madison Guarantee.

Bill Clinton would face a series of allegations of sexual assault and harassment from several women, including Kathleen Willey, Juanita Broaddrick, and Paula Jones.

Clinton later became a frequent passenger aboard Epstein’s private jet, which has been called the “Lolita Express” in media reports, following a 2002 trip to Africa. The trip aboard Epstein’s jet included actors Kevin Spacey and Chris Tucker.

In a 2016 article, Fox News reported that, based on a review of flight logs, Clinton had made “at least 26 trips” aboard Epstein’s private jet. The flight logs indicate that Clinton flew without a Secret Service detail for at least five of the flights.

The article also notes that those regularly traveling with Clinton included “Epstein’s associates, New York socialite Ghislaine Maxwell and Epstein’s assistant, Sarah Kellen, both of whom were investigated by the FBI and Palm Beach Police for recruiting girls for Epstein and his friends.”

Q: “You had Bill Clinton on the airplane ten or twenty times, right?”

Visosky: “Yeah. He’s my main focus. I remember him being on the aircraft, sure.”

At the February 2015 Conservative Political Action Conference, in the runup to the 2016 presidential election, Trump indicated to Fox News’ Sean Hannity that Bill Clinton’s connections to Epstein would prove problematic for the former president:

The ongoing investigation of Epstein is likely to implicate others as it progresses, and the scandal may have already impacted an Israeli election. On July 11, 2019, Israeli media Haaretz reported that Epstein “partnered with former Prime Minister Ehud Barak to invest in the former prime minister’s startup.”

Just weeks prior, on June 26, Barak announced his intention to return to politics and challenge current Prime Minister Benjamin Netanyahu in the upcoming elections.

In a subsequent interview with the Daily Beast, Barak said that he had met with Epstein “more than 10 times and much less than a hundred times, but I can’t tell you exactly how many. I don’t keep count. Over the years, I’ve seen him on occasion.”

Barak continued, noting that he “never attended a party with him. I never met Epstein in the company of women or young girls.” Barak also has admitted to visiting Epstein’s private island, although he said he hadn’t been to any parties or met any girls there.

On July 16, the Daily Mail published a series of photos of Barak entering Epstein’s New York mansion in January 2016. In the photos, Barak, who has admitted he is the one pictured, had covered his face up to his sunglasses with a camo-patterned “gaiter.”

The Daily Mail reported that “a bevy of young women were also seen going into the multi-millionaire’s lavish seven-story home on the same day that Ehud Barak was snapped.” It isn’t clear if Barak was still present at Epstein’s home when the “young women” arrived.

The photos of Barak are of some note as they were taken in 2016 by Probe-Media, described on its website as “an elite agency that offers a bespoke service to international News outlets, intelligence agencies, and corporate and individual clients.”

It’s worth asking why these pictures are only coming out now, and how Probe-Media knew that Barak would be present at the Epstein residence on that particular day. Why did they choose to wait outside Epstein’s mansion for the entire day, in the cold New York weather, to capture photos of the female visitors?

Although the Epstein investigation is still in the early stages, it’s suspected that more individuals will be caught up in the unfolding scandal. Epstein was denied bail on July 18 by Judge Richard Berman, who noted, “I am not suggesting that a different bail package would be appropriate because I doubt that any bail package can overcome the danger to the community.”

Perhaps the new investigation will provide answers and accountability in relation to the early investigation that allowed Epstein to escape with a light punishment for his crimes.