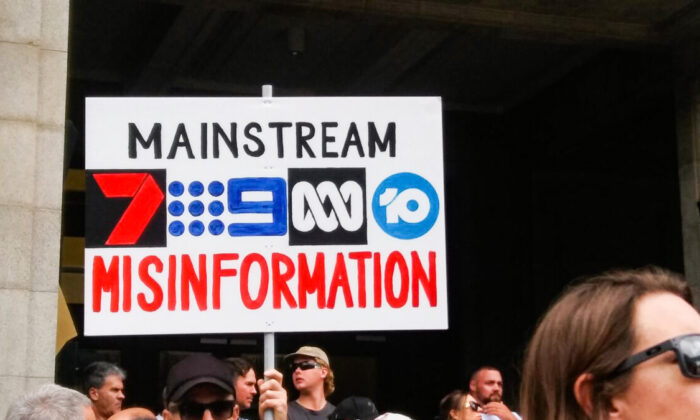 Western Australians angry over the state’s vaccine mandates for around 100,000 health and mining workers have grown increasingly frustrated about the misrepresentation of them from both the state government and local media.

This comes as thousands of West Australians took to the city centre in the state’s capital, Perth, on Oct. 16 to protest government directives that will force WA’s health, construction and mining workers to either get vaccinated or lose their livelihoods.

Currently, the decision to mandate vaccines has evoked increasing criticism of the McGowan government, particularly from nurses, midwives, health sector administrative staff, miners, and construction workers, among others who have protested for the third time in the past month to argue that vaccination should be a choice.

But the crowd also expressed irritation towards the portrayal of protestors from state media and government as “anti-vaxxers.”

A nurse speaking at the event stated that rally goers who had stood up against mandatory vaccination requirements were not against vaccines in general—in contrast to claims from WA Premier Mark McGowan and some media reports.

“We are not anti-vaxxers. As a nurse, I had all vaccinations that were required,” she said. “What we’re about, Mr. McGowan, is we are anti-mandatory medical treatments.”

Other grievances included allegations of underrepresentation of attendee numbers across the protests, as well as portrayal from media of far-right extremists within the crowd.

A regular speaker at the anti-mandate events, Judy Wilyman, said that reports had falsely painted a handful of individuals as representative of the overall crowd.

“Why does the media present biased information when two people out of 6,000 are not a representation of the type of people that are at the protest,” Wilyman told The Epoch Times.

“Any journalist that turns up and decides that it’s satisfactory to interview two extreme looking people when the majority of people there are parents and grandparents trying to be heard regarding their children’s health … you know, I find that mind-blowing.”

Wilyman, who is a social science researcher specialising in critiquing Australia’s immunisation policy, is best known in Australia for her PhD Thesis, “A critical analysis of the Australian government’s rationale for its vaccination policy,” which received heavy criticism from the scientific community.

Speaking at the event, Wilyman said that such actions from the government and media had worked to divide and significantly undermine relations between family and friends.

“With terms such as ‘vaccinated’ and ‘unvaccinated people,’ we now have a toxic discriminatory society where family and friends have been divided due to the false information being provided by Mark McGowan’s government and by the [media].”

The crowd also expressed growing discontent towards McGowan after he said last month that protestors attending the rallies should “grow a brain.”

“This is a real low point in history where a premier thinks it’s acceptable to tell us to grow a brain,” Wilyman told The Epoch Times. “He is showing contempt for the citizens that he is meant to represent.”

The Epoch Times reached out to the McGowan government for a response but did not receive a reply.