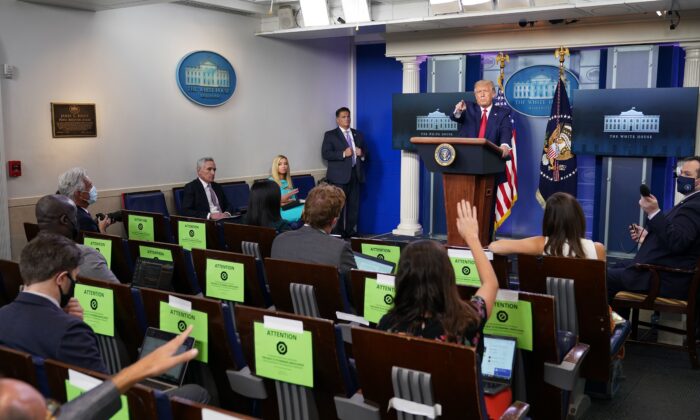 President Donald Trump speaks during a press conference in the Brady Briefing Room of the White House in Washington on Sept. 16, 2020. (Mandel Ngan/AFP via Getty Images)
Viewpoints

Media Disgrace Themselves in Calling Election Still Being Contested

The elaborate pretense being conducted that the U.S. presidential election has been decided resembles the exaggerated excitement of a juvenile team when a contested goal or touchdown has been scored.

The side that claims to have scored, especially if it’s a game-winning or even championship-winning play, may have already uncorked champagne and carried the winning scorer on their shoulders off the field before the officials succeed in disqualifying the subject of the premature celebrations.

The electoral waters are being muddied by a number of arbitrary decisions taken by Trump’s unrelenting enemies in the media. It was clear enough late on election night that Trump had carried North Carolina and Alaska, yet those states haven’t yet been allocated to him by any of the media companies.

Arizona was awarded to Joe Biden by Fox News relatively early on election night, in what appeared to be a dramatic signal that that organization was ending its comparatively favorable treatment of the administration, and getting onside with its likely replacement.

In truth, Biden is ahead in Arizona but his lead is steadily dwindling and by any normal criteria, Arizona remains an undecided state. So does Georgia. If Alaska, North Carolina, Arizona, and Georgia are added to Trump’s column, he has 259 electoral votes, 11 short of the 270 required for election.

The 20 electoral votes of Pennsylvania are being discussed before the U.S. Supreme Court this week. The requirement of Pennsylvania legislation that observers of both major parties be allowed to inspect all ballots has been widely ignored. Since the Constitution assigns responsibility for the administration of federal elections to the legislatures of the states, the three-day extension for the acceptance of mailed ballots granted by the Pennsylvania Supreme Court is beyond the legal power of that court.

That extension is the principal apparent basis for Biden’s very late and very small lead in that state.

The numerous allegations in many states of traditional stuffing of ballot boxes and impersonation of voters, even if substantially true, won’t add up to a Trump electoral victory overall. What leaves this race still undecided is the possible effects in certain states of the changes to voting rules adopted ostensibly to accommodate the COVID-19 crisis.

A number of states mailed unsolicited ballots to the entire voters’ list, which is constantly out of date because of people dying, moving away, coming-of-age, or arriving in the state. At the same time, and allegedly for the same reasons, the date by which mailed ballots or those dropped in prearranged boxes could be accepted was moved back to as much as six days after Election Day, while requirements for proof of identification of the voter and avoidance of duplicated ballots were, in many cases, relaxed.

The result, predicted by everyone and intended by the chief authors of these changes, is an unprecedented opportunity for what is called ballot-harvesting: collecting a large number of uncompleted ballots and fraudulently completing them in support of one of the candidates.

This year, only Joe Biden has benefited from this phenomenon. There are no significant allegations of electoral injustice in Republican-run states; Arizona, Georgia, Florida, Iowa, and Ohio were all thought to be close-run contests, though only the first two really have been. In all cases, there are no significant complaints about abuses of the rules, nor are there any such concerns, from any state, blue or red, fairly won by a wide margin.

In straight administrative terms, all of the largest states except Pennsylvania (California, Texas, Florida, New York, Illinois, and Ohio) counted practically all of their votes, 50 million or more, without incident on Election Day.

But in the three states that were notoriously won four years ago by Trump by very narrow margins in elections whose honesty hasn’t been impugned, and which gave him his victory— Michigan, Wisconsin, and especially Pennsylvania—because of the pre-electoral involvement of the U.S. Supreme Court, a serious possibility exists that tens or even scores of thousands of fraudulent votes were dumped into the system to ensure a Biden victory and incidentally to inflict revenge for the Democratic defeat in 2016.

All three states have Democratic governors, and Michigan and Wisconsin are also being challenged by the Trump campaign, though the process is just beginning.

Pretense of No Controversy

Apart from the scale of the potential voting fraud, the most remarkable aspect of this controversy is the febrile effort to pretend that there is no controversy, that the Trump era is over and the position taken at all times by his enemies that he’s a corrupt aberration, a freak of history, and an illegitimate president, has been confirmed.

Never mind that Trump gained approximately 72 million votes, more than any presidential candidate in American history except Biden himself, and let’s overlook that the alleged racist and cultivator of division geometrically increased his party’s previous share of the votes from African Americans and Latinos.

What happened to Russian influence in the election? There never was any even in 2016, yet this week, Rep. James Clyburn (D-S.C.), who rescued the collapsed Biden candidacy in March, declared that Trump’s high vote total was due to Russian President Putin’s interference. This man is the Democrats’ third-ranking member of the House of Representatives.

The New York Times’ ineffable Tom Friedman wrote that Al Gore had taken “a bullet for the country” in ending his dispute of the vote in two counties in Florida in 2000. He declared himself to be terribly upset that Trump would challenge the apparent election result.

Gore was shut down by the Supreme Court after 37 days. This is the same Tom Friedman who swallowed the whole fishing rod on Trump-Russia collusion and said it was as great an assault on U.S. sovereignty as Pearl Harbor or 9/11. Mayor Jim Kenney of Philadelphia said the president should “put on his big boy pants and concede the election.”

Someone should change the mayor’s diapers.

If Biden really won this election, it’s a considerable feat of perseverance and coalition building, though that takes nothing from Trump’s achievement in coming from nowhere to be president, having an extraordinarily successful term in almost all policy areas, and profoundly reorienting the Republican Party toward the lower-middle and working classes and minorities, without compromising its capitalist credentials.

Whatever happens, the media must no longer have the right to decide the winner of presidential elections, as they have abused that right, and have generally, with their poll-taking allies, disgraced themselves by their rabid partisanship and dishonest coverage.

If this is an attempted theft, there’s no precedent for it; 1876 was a matter of disputed electors and was resolved in the Congress and between the candidates. If Trump emerges as the real winner, those who have criminally harassed him, from the Russian scam to the fruited plain of ballot harvesting, are in for a terrible and well-deserved reckoning.