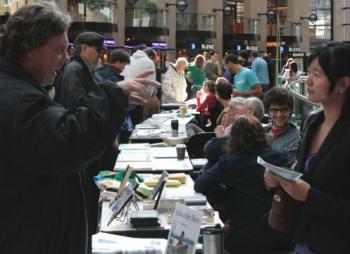 VANCOUVER—Individuals and organizations concerned about media ownership consolidation and related issues were part of Media Democracy Day 2008 (MDD) at the Vancouver Public Library on Saturday.

The eighth annual event consisted of workshops, training sessions, and a forum that addressed issues such as media concentration, some of the main battles currently being fought against big media, the fight for an open internet, and new challenges that have surfaced in the changing media landscape.

“Canada has one of the most concentrated media environments in the world, so it’s very dangerous for democracy, free speech, and having a diversity of voices in media,” said Steve Anderson, national coordinator of Campaign for Democratic Media and organizer of MDD.

“I would like to show [through the event] that the current system is problematic and we can change it. And also that there are actually independent sources of information out there, it just takes more work to find them.”

Organizations including Campaign for Democratic Media, The Tyee, The Epoch Times, Co-op Radio and the SFU Communication Student Union had booths at the event

In three interactive panels, several experts explored the possibility of using “new media” to do in-depth investigative projects, find untold stories and engage new audiences, and whether such projects could counteract big media and redefine journalism.

Among the panelists were Rex Weyler, author and co-founder of Greenpeace; Matt Thompson, online video producer and co-founder of SaveOurNet.ca; Andrea Hayley, president of The Epoch Times Vancouver; and Robert Hackett, SFU professor and author of Remaking Media.

Brian Campbell of the Seriously FreeSpeech Committee described mainstream media as having the “fear of covering things honestly.”

“I think there are obviously corporations owning the media; they have a tilt towards corporate perspective on what’s happening in the world,” he said.

Currently, only four corporations, CanWest, Quebecor, Torstar and Gesca, control 72 percent of Canada's daily newspaper circulation, according to the Standing Committee on Transport and Communications.

“The development of the broadcasting system in Canada has historically been undergirded by finance, by the interests of private capital groups, so private corporations are the ones supporting the infrastructure,” said David Skinner, co-founder of Campaign for Democratic Media.

“We want to have a more diverse version of Canadian perspectives in the media. We need a more diverse range of financing in the broadcasting system.”

Eric Heide, who attended the event, was supportive of what MDD is about.

“The importance of this kind of event as far as I’m concerned is to let the average person, particularly people who read a lot, understand and know that there are organizations dedicated to freedom of communication,” said Heide, a bill collector.

“Businessmen want to use the media as a marketing machine… There’s a bias there, a vested interest.… You don’t see the other side of the view, [like] what you see in the Epoch Times or the Georgia Straight.… All you hear is what’s considered popular, in style, and in fashion.… It’s a total censorship by the business.”