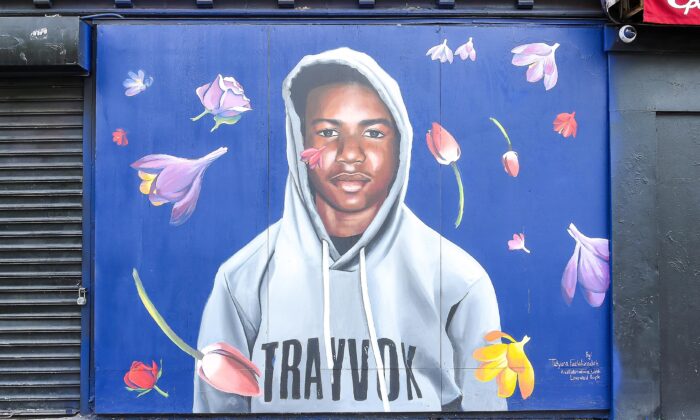 On the 10th anniversary of Trayvon Martin’s death, the media is still rewriting history. He is being depicted as an innocent young victim minding his own business who wasn’t a threat to anyone in Sanford, Florida, when George Zimmerman shot him.

“The killing of this baby-faced, hoodie-wearing, unarmed youth at the hands of a stranger still reverberates 10 years later,” writes the Associated Press.

It’s almost as if there wasn’t a trial, and that the evidence wasn’t clear and overwhelming.

The anniversary is opening old racial wounds. AP is merely picking up where the media left off a decade ago. In 2012, NBC News deceptively edited a 911 call by Zimmerman to make it appear that he had volunteered Martin’s race. It turned out that Zimmerman only revealed Martin’s race when asked about it by the police operator.

“When I think about this boy, I think about my own kids,” President Barack Obama famously said at the time. “If I had a son, he’d look like Trayvon.” The media invariably described the case as a white man killing a black youth, but they ignored the fact that Zimmerman was Hispanic and his great-grandfather was black.

Race always played a central role in the judicial handling of the case and its news coverage. If Zimmerman and Martin had both been white, or if Zimmerman had been black, it seems unlikely this case would ever have gotten to court. The local district attorney declined to prosecute, and the chief of police lost his job because he refused to charge Zimmerman with a crime. The county medical examiner’s investigation confirmed Zimmerman’s story, and was removed from the case for his troubles. Even the case’s lead detective told the jury that he believed Zimmerman’s version of events.

The debate among the forensic experts wasn’t over who suffered injuries. The front and back of Zimmerman’s head revealed wounds, while Martin suffered no similar injuries. The prosecution experts never contradicted Zimmerman’s claim that Martin was on top of him at the time he was shot, and a pathologist demonstrated as much based on the angle of the bullet wound. Everyone agreed that there were wounds on Martin’s hands that were consistent with him hitting Zimmerman. By contrast, there were no wounds on Zimmerman’s hands.

The debate between the experts was only over how severe Zimmerman’s wounds were.

After examining photos of Zimmerman immediately after the attack, Jacksonville medical examiner Valerie Rao claimed that they were “insignificant.” Unhelpfully, she estimated that the number of blows to Zimmerman could have ranged from just one to more than a half dozen. She refused to say what the maximum number could be.

Pathologist Vincent Di Maio, however, identified six separate blows that were landed on Zimmerman’s face and head. He pointed out that you can’t judge the severity of blows from photos, and certainly not just from the photos taken right at the time of the incident. Injury patterns, Di Maio said, can only be revealed based on how bruising changes over time. “You can have severe head trauma without any marks on the head,” he explained.

The witnesses who saw the struggle between Zimmerman and Martin confirmed Zimmerman’s account. The witness with the clearest view, Jonathan Good, was only 15 to 20 feet away when Zimmerman fired the shot. His testimony on the color of the men’s clothes and skin confirmed that Martin was on top of Zimmerman, straddling and pummeling him.

Unfortunately, the Associated Press and other news outlets are ignoring all this evidence.

The media irresponsibly inflamed the Zimmerman case when the shooting occurred, and is continuing to do so now. Inaccurate press coverage bears at least some responsibility for the racial divisions in the country today.