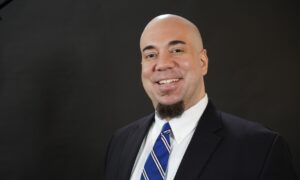 Evidence doesn’t support the claim that there’s “systemic racism” among police, and the media has contributed to that misperception, according to associate professor Wilfred Reilly from Kentucky State University.

“I think that present company of course accepted a great deal of the blame here has to go to the U.S. media and, to a lesser extent, the world media,” Reilly recently told NTD, The Epoch Times’ sister media.

Reilly is the author of “Taboo: 10 Facts You Can’t Talk About.” The first chapter of the book is called “The Police Aren’t Murdering Black People.”

“In reality, the total number of unarmed brothers—unarmed black men—killed by police in the most recent year on record was 18,” Reilly said.

“There’s a reason for that incredible discrepancy between reality and what people perceive,” he continued. “And a lot of that is the information that people are consuming—the sensationalist content we see out there so much in, in particular, the USA.”

Reilly said that the media reports heavily when a black man is killed by police, while in a typical year, about 50 percent of people shot by police are Caucasian, and another 20 percent are Hispanic.

“So again, the image doesn’t match the reality,” he added, saying the data doesn’t reflect the narrative of the Black Lives Matter (BLM) movement. The BLM movement claims that there’s “systemic racism” in the country and calls for defunding the police.

In his recent address to a joint session of Congress, Biden said he wants “to root out systemic racism in our criminal justice system, and to enact police reform in George Floyd’s name,” referring to the black man who died after a white police officer knelt on his neck for several minutes during an arrest last year. His death sparked widespread protests and riots and renewed calls to defund the police.

“I don’t think we need a sweeping reform of all of American policing or something like that,” Reilly said. “Crackdown on individual bad cops and departments, fight racism, that’s about it. Keep the cops on the streets.”

“The left knows … they have no proof, none whatsoever, of systemic racism or systemic police brutality in the police services involving the 800,000 men and women that are police officers in this country,” Kerik told NTD.

“The chances of you being shot and killed in the United States as an unarmed male, unarmed black male is like 0.00018. That is far from systemic,” Kerik said.

“So this is one of the terms that they continue to use, that they like to use, but the bottom line is, if they want to reform anything, they have to reform the leadership within the Democratic Party, where the leaders in cities like Atlanta, and Chicago, and Baltimore that have the highest violent crime and highest murder rates; they have to come forward and tell their communities what the problem really is. It’s not the cops.”