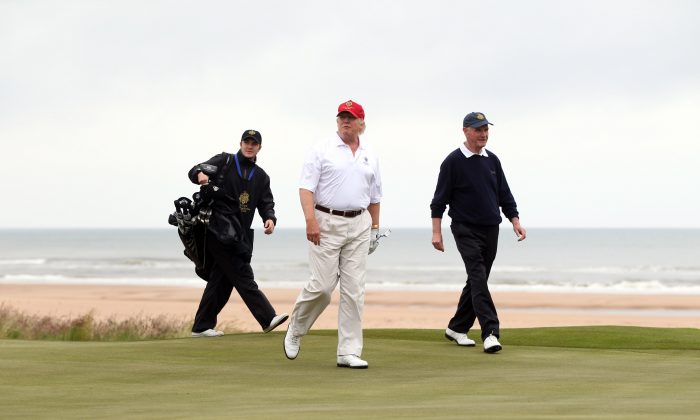 Donald Trump plays a round of golf after the opening of The Trump International Golf Links Course on July 10, 2012 in Balmedie, Scotland. (Photo by Ian MacNicol/Getty Images)
Politics

WEST PALM BEACH, Florida—President-elect Donald Trump has ditched his press pool once again — this time traveling to play golf at his club in Jupiter, Florida, without a pool of journalists on hand to ensure the public has knowledge of his whereabouts.

A club member posted a photo on Twitter of Trump on the greens Saturday morning and said the president-elect was accompanied by about 25 U.S. Secret Service agents. Reporters had not been advised of the visit.

Transition aide Stephanie Grisham confirmed that Trump had made a “last minute trip” to Trump National Golf Club Jupiter, which is about a half-hour drive from the Mar-a-Lago estate, where Trump has been spending the holidays.

Grisham said that she and other aides weren’t aware of the trip and “appreciate everyone’s understanding.”

“We are in the home stretch of this transition period and don’t anticipate any additional situations like this between now and inauguration,” she said in a statement. She added: “We hope this one incident doesn’t negate all the progress we have made and look forward to continuing the great relationships we have built.”

Trump, both as a candidate and during the transition, has often scoffed at tradition, such as allowing a group of reporters to follow him at all times, to ensure the public knows where he is. Not long after his election, Trump went out to dinner with his family in Manhattan without informing the pool of his whereabouts.

The practice is meant to ensure that journalists are on hand to witness, on behalf of the public, the activities of the president or president-elect, rather than relying on secondhand accounts.

The White House also depends on having journalists nearby at all times to relay the president’s first comments on breaking news.

Trump aides appear to have made an effort in recent weeks to offer additional access, allowing reporters to camp out outside a doorway at Mar-a-Lago to document staff and Cabinet candidates’ arrivals and departures and providing information about his meeting schedule.

Every president and president-elect in recent memory has traveled with a pool of journalists when leaving the White House grounds. News organizations take turns serving in the small group, paying their way and sharing the material collected in the pool with the larger press corps.