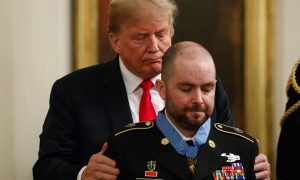 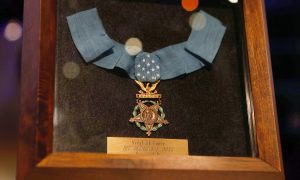 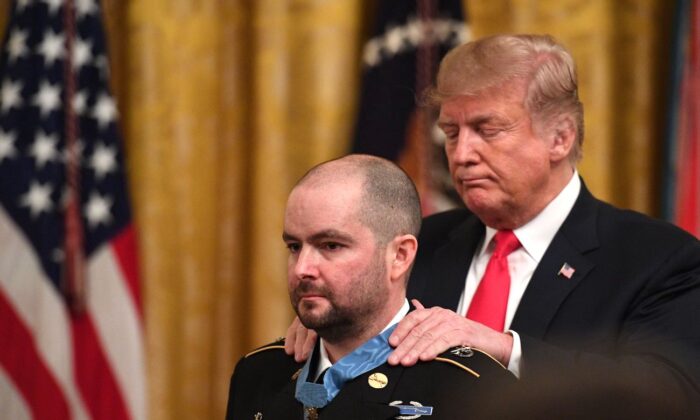 President Donald Trump awards the Medal of Honor to Ronald Shurer in Washington on Oct. 1, 2018. (Jim Watson/Getty Images)
US News

Miranda Shurer told The Associated Press that her husband, who was diagnosed with cancer three years ago, died at Sibley Memorial Hospital in Washington.

Citing restrictions from the pandemic caused by the CCP (Chinese Communist Party) virus, also known as the novel coronavirus, she said her husband will be buried in Arlington National Cemetery near the nation’s capital at a future date.

Ronald Shurer II, from Fairbanks, Alaska, received the Medal of Honor from President Donald Trump in October 2018, in a formal White House ceremony attended by 250 people. The award—the highest and most distinguished military decoration that a member of the United States armed forces can receive—was for his actions in braving heavy gunfire to save lives in Afghanistan back in 2008.

At the time, Shurer was a senior Special Forces combat medic with the 3rd Special Forces Group. On April 6, 2008, his team encountered machine gun and sniper fire and rocket-propelled grenades from an enemy force of more than 200 fighters in northeastern Afghanistan’s Skok Valley.

Shurer stabilized one solder, then sprinted through enemy fire and up a mountain to the lead members of the unit, where he stabilized four more solders. He also helped evacuate them by carrying and lowering the wounded soldiers down the steep mountainside, using his body to shield them from enemy fire and shrapnel.

After he loaded the solders into an evacuation helicopter, he went up the mountain back to the fight.

“For more than six hours, Ron bravely faced down the enemy. Not a single American died in that brutal battle, thanks in great measure to Ron’s heroic actions,” Trump said at the Medal of Honor award ceremony in 2018.

“Ron was the embodiment of the Special Forces soldier, a dedicated husband, and a loving father,” said 3rd Group commander Col. Nathan Prussian in a statement reported by Army Times. “His heroic actions were an inspiration throughout 3rd Special Forces Group, Special Forces Regiment, and the U.S. Army. Our condolences go out to his family during this difficult time.”

Shurer was first rejected by the military because of a medical condition, but later reenlisted in 2002. He was accepted the second time around. In late 2006, he was promoted from sergeant to staff sergeant. Shurer served with the Combined Joint Special Operations Task Force in Afghanistan from late November 2007 to late May 2008 and was honorably discharged a year later.

He then began his career with the U.S. Secret Service as a special agent in September 2009, and was later selected for the Secret Service’s counter-assault team and assigned to the Special Operations Division in June 2014.

In addition to his wife, Shurer is survived by two sons.