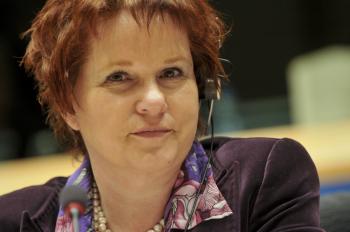 Martin Murphy
View profile
Follow
biggersmaller
Print
DUBLIN—UK Liberal Democrat MEP, Sharon Bowles, this week called on her fellow EU members to cut Ireland and other EU countries some slack with respect to the interest rates being paid by them for monies received in bailout payments.

Ms Bowles, elected Chair of the European Parliament's Economic and Monetary Affairs Committee, has put the idea forward that countries that have availed of the bailout mechanisms from the European Union rescue schemes should be refunded some of the interest they paid when they pay off their borrowings.

Ms Bowles believes that fellow EU countries should not profit from the misfortunes of those who have had to ask for credit.

A statement on the British MEP's website said her proposal “represents more solidarity with neighbouring European countries and a more effective way of dealing with deficits. As with other countries, the UK currently stands to get a large windfall on the interest rate being charged on Ireland's debt repayments.”

"Fellow EU countries should be acting out of solidarity with their neighbours, not like investment banks,” said Ms Bowles. The MEP was of the opinion that while those countries that have sponsored rescue packages should not be out of pocket, they should also be guarded against risk. Ms Bowles also believes that they should not benefit from interest-based windfalls.

The proposal outlined by Ms Bowles was as follows: Those countries sponsoring loans at present should put any profit they make above the costs they incur while providing the loan into a holding area. This premium will be kept for the lender if the loan is defaulted on; otherwise it is returned to the borrower. Therefore, the borrower would suffer somewhat while paying the loan back, but would not be taken advantage of by other EU countries that should be supporting them.

"These premiums should be kept in a pool that acts as insurance against default – a bit like a no claims refund,” said Ms Bowles.
Bowles believes that this approach would make for a much healthier, viable EU economy because “struggling countries” would be getting their excess premiums back.

"Also, markets would respond to the likelihood of the borrowing country winning back the pool. It is far more important that we find tools such as this to build sustainable economies across the EU than risk forcing struggling countries into worse-off positions," claimed Ms Bowles.