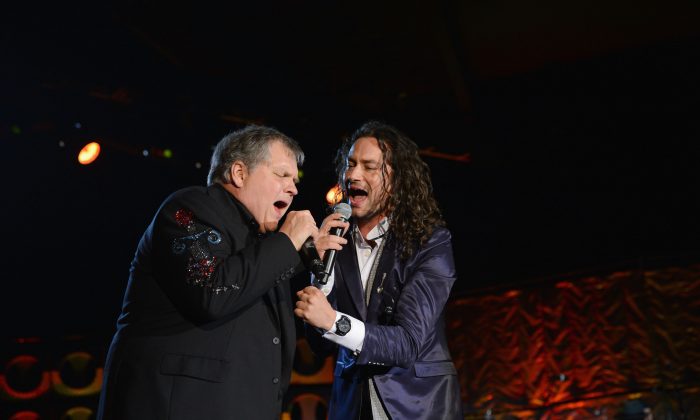 Meat Loaf and Constantine Maroulis perform onstage at the Songwriters Hall of Fame 43rd Annual induction in New York City in this file photo. Meat Loaf rescheduled a gig in Nottingham due to unspecified illnesses among his band. (Larry Busacca/Getty Images for Songwriters Hall Of Fame)
Entertainment

Meat Loaf Illness: Singer Pulls Out of Performance in Britain

“We are very sorry to announce that tonight’s [April 14] performance has had to be postponed due to medical reasons afflicting several members of the band,” wrote Meat Loaf on his Facebook page.

The American rocker, who headlines his own band, is in Europe on his farewell “Last at Bat” tour.

The canceled performance in Nottingham is rescheduled for May 20th, the rocker said.

A spokesman told Reuters that he couldn’t give more details about the illness but that the singer should be back on stage on April 17 in Manchester.

Meat Loaf said in a pre-tour interview with Reuters that he doesn’t want to travel anymore.

“I outweigh (Mick) Jagger by about 100 pounds (45 kg) and that counts for something. He hasn’t seen the wear and tear,” he said.

Meat Loaf canceled a European tour in 2007, after he said he was diagnosed with a cyst on his vocal cords. He walked off the stage in the middle of a concert in Newcastle in November of that year, telling fans that “This is the last show I may ever do in my life.”

“I have to do what the doctors tell me so I can look forward to healing and coming back strong in 2008,” he said in a later statement. “Let me dispel any rumours before they begin—I will be back.”