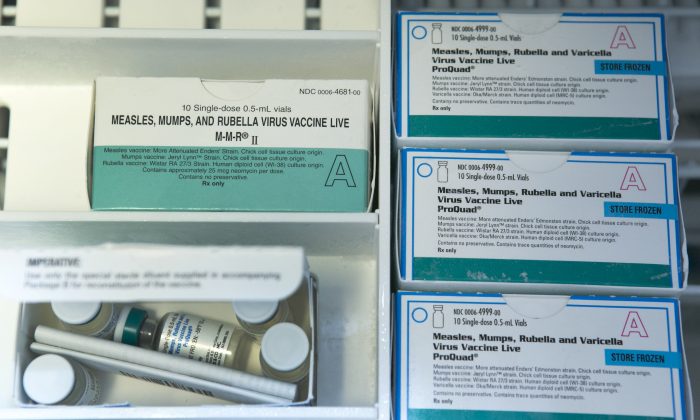 Boxes of single-doses vials of the measles-mumps-rubella virus vaccine live at the practice of Dr. Charles Goodman in Northridge, Calif. (Damian Dovarganes/The Associated Press)
US

Apparently Parents Are Trying to Infect Kids at ‘Measles Parties’

There’s been reports of so-called “measles parties,” or events in which parents of unvaccinated children mingle with kids who are infected with the virus, so they can build up their kids’ resistance to the disease.

Now, it’s not exactly clear if there’s ever been a “measles party” in recent weeks, but a San Francisco-area broadcaster reported that a local mother offered to arrange a play date between measles-infected children and unvaccinated kids.

Julie Schiffman, a mother of two who lives in Marin County, said her kids aren’t vaccinated. “I would never do that to my kid,” she said.

She said she was approached by a friend who knew her kids weren’t vaccinated. The friend, she added, offered to set up a play date with another child sick with the measles.

“I would want that to be something they decide on their own, when they’re older and are more capable of assessing the risks and dangers,” she told KQED-TV. “When they’re teenagers, I’d say, ‘okay, you have a choice, you can get vaccinated or you can get the measles, what would you rather?'”

Although this might sound odd, measles and chicken pox parties were done all the time before vaccines were available.

“People did this with chicken pox all the time,” said Art Reingold, an epidemiology professor at UC Berkeley. “Parents would have kids lick a lollipop and give it to other kids, or mail it to other kids.”

“Measles is a serious illness that can have significant consequences,” he said, reported the Los Angeles Times. He said about 30 percent of people who get the disease have been hospitalized.

“Any parents who are considering this, they should have a look at a child who’s really sick with measles, and I think they’d change their minds,” added Marin County Public Health Officer Matt Willis.