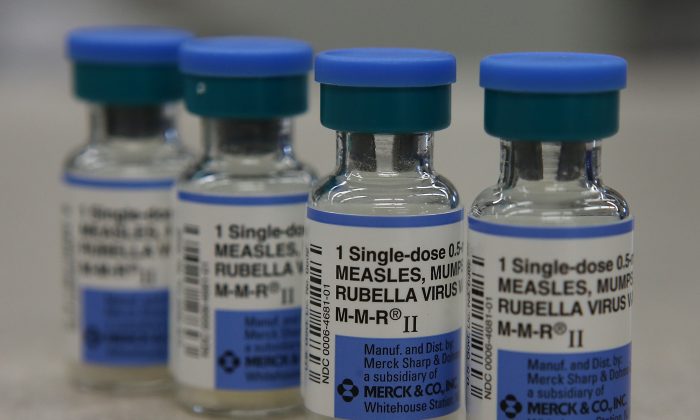 Vials of measles, mumps and rubella vaccine are displayed on a counter at a Walgreens Pharmacy on January 26, 2015 in Mill Valley, California (Justin Sullivan/Getty Images)
US

California public health officials are working to stop a measles outbreak after a student was tested positive for the disease in a school which had large numbers of unvaccinated students, ABC News reports.

The child, who attended Yuba River Charter School, appears to have contracted measles on a trip overseas and has now recovered from the illness, but doctors are worried that he might have infected other children.

Only staff and students who have been vaccinated are allowed to attend the school.

Measles is an airborne disease that can easily spread to people who aren’t vaccinated against it. In 2014, a measles outbreak originated in Disneyland, southern California, and ended up infecting more than 150 people across 7 states, leaving 17 hospitalized.

In the wake of the Disneyland outbreak, California passed a law last year revoking the right of parents to exempt their children from vaccination due to personal belief, but in some areas, vaccination rates are still low.

For a population to develop “herd-immunity” against measles, around 95 percent have to be vaccinated, but the vaccination rate at the Yuba school’s kindergarten was just 42 percent.

“As the state’s public health officer, it’s concerning to receive a report of a child with measles because it’s a disease that can easily be prevented,” Karen Smith, a California public health official, told ABC News. “Immunization is the best way to protect against measles. Two doses of the Measles, Mumps, and Rubella vaccine are approximately 97 percent effective at preventing disease in exposed persons.”

According to the Yuba school, only staff and students who have been vaccinated are allowed to attend the school.