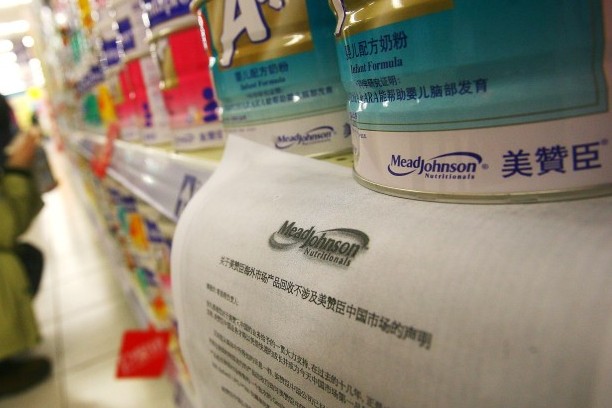 This 2006 file photo shows cans of Mead Johnson baby milk powder on a store shelf in Ningbo, Zhejiang Province, China. At the time, Mead Johnson recalled a batch of its powdered milk products after it were found to contain metal particles. (China Photos/Getty Images)
Business & Markets

A baby milk formula recall scare is spreading across the United States, as retailers such as Wal-Mart Stores Inc., Kroger Co., Safeway Inc., and Walgreen Co. have removed baby formula products made by Mead Johnson Nutrition Co. from their stores.

According to Bloomberg, an infant boy in Missouri was given Mead Johnson’s Enfamil Premium Newborn powdered formula from a local Walmart store and was sick from a bacterial infection called Cronobacter and died. This form of bacteria causes an uncommon but fatal infection of the bloodstream and central nervous system. It can affect all age groups but infants are particularly vulnerable due to their weaker immune systems. Although rare, the most notable cases are in terms of contaminated powdered infant formula. Under normal circumstances, high temperatures during the manufacturing process eliminate the bacteria, however remnants can still remain after preparation.

The actual cause of the death thought to be linked to the Enfamil baby milk formula is not conclusive, with test results not being available until end of next week at the earliest. Preliminary tests of samples taken from the same lot as that formula given to the baby boy who died have found no presence of the bacteria, according to Mead Johnson Nutrition. There has also been another reported case in Illinois where a baby is recovering from an infection said the state health department. In that instance, the baby became unwell in Missouri while away from home its home in Illinois.

“As far as we know, there is no connection between Enfamil Newborn and this second case,” Mead Johnson spokesperson Chris Perille said in an interview with Bloomberg. “Clearly if this other case was connected to Enfamil Newborn, we would have received case information and been contacted for samples.”

In a written statement from the Illinois-based company, “These new results reaffirm the testing conducted before the batch was made available to retailers and consumers. Based on both sets of tests, Mead Johnson can say with confidence that Enfamil Premium Newborn formula, like every infant formula the company produces, is safe.”

In 2006, Mead Johnson recalled a batch of Gentlease branded baby formula after the formula was found to contain metal particles.

Mead Johnson Nutrition (MJN) was spun off from Bristol-Myers Squibb in 2009. The Glenview, Ill.-based company makes and sells children’s nutritional formula and has an increasing presence in developing countries like China, Thailand, and Malaysia. The company had sales of $3.1 billion in 2010.

The share price for Mead Johnson dropped 5.1 percent in after-hours trading on Friday.