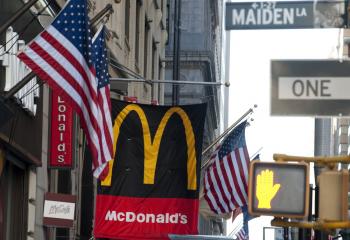 Alex Johnston
View profile
Follow
biggersmaller
Print
McRib sandwiches will be sold again in McDonald’s locations across the country in the next few weeks, according to the company this week.

“We’re stocking up on Napkins! The Legendary McRib is coming back Nov. 2,” the company said via its Twitter account.

The company is bringing back the sandwich around the country due to loyal customers’ desire for the sandwich, the Wall Street Journal reports.

The elusiveness of the McRib sandwich, not actually made from ribs but from an amalgamation of boneless pork, has prompted fans to go to extraordinary lengths to find it.

Ryan Dixon of Burbank, California, drove 10 hours to Medford, Oregon after hearing that the chain sold the elusive item.

"It has a ghostly quality," Dixon, 30, told the Journal. "You don't know when it will appear. It's the girl who you are in love with who has always been a tease to you."

On one of the numerous McRib fan pages on Facebook, fans were jubilant as news broke of the sandwich’s more widespread availability.

“I'm tired of Hotdogs and Hamburgers !!! Bring back the McRib it was the best !!!” said McRibb fan Todd A. Rice on the page.