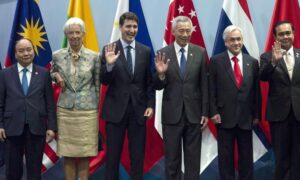 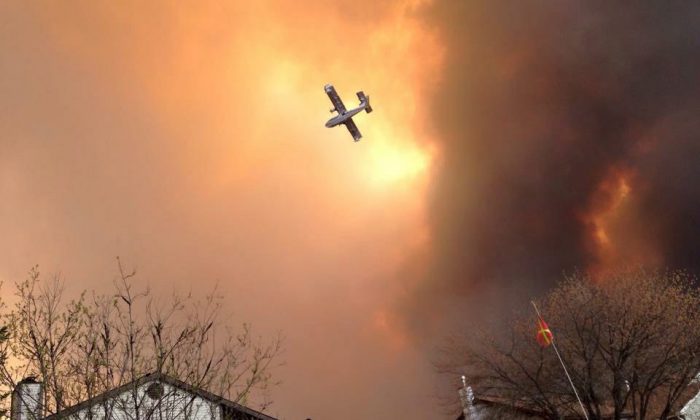 Smoke fills the air as a small plane flies overhead in Fort McMurray, Alberta, Tuesday, May 3, 2016. The entire population of the Canadian oil sands city of Fort McMurray, has been ordered to evacuate as a wildfire whipped by winds engulfed homes and sent ash raining down on residents. (Kitty Cochrane/The Canadian Press via AP)
Canada

The Fort McMurray, Alberta, wildfire has caused extensive damage and forced more than 88,000 to flee their homes, while officials warned on May 4 the situation could get worse.

The weather played a large role in the Fort McMurray blaze. Dry vegetation, strong winds, low humidity, and warm temperatures have contributed to the growth of the fire, according to Weather.com.

The area saw about 60 percent of its average precipitation during the months of January to April this year. The average precipitation between those months is 2.72 inches, but the area only saw 1.62 inches of rain. Only four-hundredths of an inch of precipitation had fallen between April 14 to May 3. The lack of rain led to less snowpack, and therefore dry vegetation.

The weather phenomenon El Niño, which usually brings warmer temperatures to western Canada in the winter also played a part. This year, from January to March temperatures were above normal, while May started out particularly warm.

A pic of what trying to leave Fort McMurray looks like right now pic.twitter.com/ESE7bzPkx1

Low humidity and strong winds also contributed to the wildfire, according to Weather.com. Relative humidity levels were in the low teens during the day the fire began up until May 3, which may have helped the blaze gain strength, since low humidity levels remove moisture from vegetation.

Strong winds also contributed to the wildfire. April and May are the two windiest months of the year in Fort McMurray. Winds measured up to 18 mph on the day the blaze began, they seemed to stabilize the day after, but even stronger winds, measuring up to 22 mph, returned again on May 3, overwhelming firefighters.

But the devastating fire has contributed to the weather as well.

Pyrocumulus clouds formed over the smoke plume a few days after the blaze began. The clouds sometimes develop over wildfires due to intense heat. The hot temperatures lead to rising air which cools and condenses as it ascends, leading to the formation of the white, puffy clouds.

Although the clouds produce no significant precipitation, they may create strong winds, which can affect the spread of the fire, according to National Oceanic and Atmospheric Administration.

Our thoughts are with the 50,000 who have had to evacuate their homes in Fort Mcmurray, Alberta pic.twitter.com/agZd6ccdmz

The Regional Municipality of Wood Buffalo said the blaze destroyed 80 percent of homes in the Beacon Hill suburb’s south end. In the neighborhood of Timberlea, a dozen trailers were damaged, while serious losses were reported in suburbs Abasand and Waterways. Many more homes were lost in other neighborhoods, too.

More than 88,000 Canadian residents have been ordered to evacuate.

Meanwhile, Prime Minister Justin Trudeau addressed the situation during a caucus meeting. He called the evacuation “extremely difficult,” and said the government is offering “total support.”

The prime minister sympathized with the victims of the blaze saying it is a “terrible time” for them since many have “lost their homes, lost their jobs, lost their property.”

“All we can say is we are here for them,” said Trudeau.

The Red Cross has begun collecting donations to help victims of the fire.