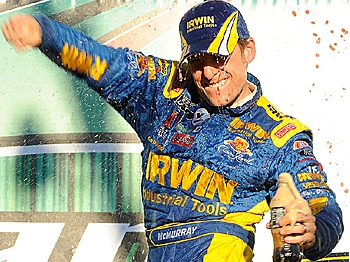 By James Fish
Print
Jamie McMurray surged to the front in the final forty laps and avoided the two big wrecks in the final five laps to win the NASCAR Amp Energy 500 at Talladega Superspeedway in Talladega Ala., on November 1.

McMurray moved into the top ten on lap 149, took the lead on lap 154, and held it for all but a handful of the remaining laps.

When the dreaded-but-expected big crashes finally occurred on laps 183 and 189, McMurray was safely ahead of the danger. This was McMurray’s first win since 2007.

“It’s been a long time since I’ve won and I want to assure every fan out there that I appreciate this as much as anybody,” McMurray said after the race. “Thanks to all my fans that stuck with me. I just can’t believe it’s here again.”

Jimmie Johnson Saved by the Yellow

Qualifying was rained out, so the grid lined up according to championship points, but Jimmie Johnson didn’t contest the lead. Johnson and several other Chase contenders dropped back to the last third of the field, intent on avoiding “The Big One,” if it occurred.

The plan nearly backfired, as Johnson waited too long to make his move, and couldn’t find a drafting partner. When the first wreck—a five-car crash that saw Ryan Newman flipping and flying through the air—Johnson was in 21st place. But drivers ahead of him began running out of fuel as the field paraded around under yellow.

“I was really, really concerned under the red flag for Newman’s crash, and it was like, ‘What do I do? How do I get to the front?’ and Chad [crew chief Chad Knaus] said, ‘Man these guys might run out of gas,’ Johnson said. “I didn’t want to believe too much in that … but they started to run out of gas, and there’s another car and then the 24, then the 5 hits pit road and I’m like, ‘Man, this isn’t Halloween. This is an early Christmas present.’”

The field was halfway through the Green/White/Checkered restart, when Brian Vickers nudged Brad Keslowski into Kurt Busch, setting off a thirteen-car pileup that claimed both Jeff Gordon and Mark Martin, while moving Johnson up to sixth.

With his competition thus eliminated, Johnson increased his points lead to 184 over Martin and 192 over Gordon.

Before the race NASCAR president Mike Helton told drivers there would be no bump-drafting through the corners. "We want to see sunshine between the cars," he said, warning that offenders would receive a pass-through penalty.

Bump-drafting on the straights is accepted because skilled drivers can usually control it, but through corners it can be exceedingly dangerous and NASCAR wanted to avoid “The Big One,” the huge multi-car pileup that so often occurs on Superspeedways.

Because of the warning, and because of the fear of getting caught up in someone else’s accident, the entire field refrained from actually racing for much of the race. For most of the first 180 laps, cars ran single file around the track, with most of the Chase contenders in their own separate pack well behind the first 30 cars.

Juan Pablo Montoya said before the race, he didn’t like the ruling. Ryan Newman criticized the rule after the race.

The next race in the NASCAR Chase for the Cup is the Dickies 500 at Texas Motor Speedway in Fort Worth, Texas, November 8, 2009. Please visit the NASCAR.com Web site for ticket and travel information.