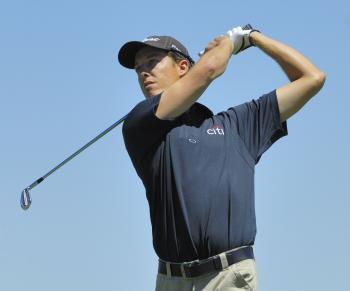 RENO, NV─Parker McLachlin managed to hang on in the final round on Sunday by shooting a 2-over 74 at the Legends Reno-Tahoe Open (LRTO) to finish at 18-under-par 270, seven strokes ahead of  England’s Brian Davis and  America’s John Rollins.

He had to rely on his trusted flat stick and strong short game to capture the $540,000 winner's check after hitting only four greens in regulation for the day. Brian Davis and John Rollins tied for second at 11-under 277.

“I've always putted well. You ask some of my buddies, it's like they expect me to make every putt. I think when I really put my mind to it, it's like it has to go in. When everything else fails I have 100% confidence that I am going to make putts. And today everything else failed, and I made putts. I wedged it pretty good and made putts. You know, that's how I've gutted it out through my professional career. That is how I did it today,” said McLachlin.

“It feels incredible. It was a hard fought day today, and I was fortunate enough to have that big cushion because I needed it. But, God, it just feels great to have accomplished this. It means the world to me,” he said.

It is the second-largest winning margin on TOUR this season, behind Tiger Woods eight-shot win at the Buick Invitational. The previous largest margin of victory at the LRTO was Steve Flesch's five-stroke win in 2007.

McLachlin, 29, took a commanding 6-stroke lead into the final round of the LRTO  after setting the 54-hole record of 20-under 196 at the mile-high, 7,472-yard Montreux Golf & Country Club near Lake Tahoe. His 54-hole score included matching the course record Friday with a 10-under 62.

Last year on the Nationwide Tour, he led the National Mining Association Pete Dye Classic by seven strokes entering the final round, but shot a 77 on Sunday to finish tied for fourth.

“It was my first time having a lead and I didn’t really approach it the right way and learned a lot from it,” McLachlin said.   By not relinquishing his 6 stroke lead in the LRTO and even increasing his winning margin to 7 strokes he appears to have put the final-round collapse behind him.

This is his first win on the PGA tour in 52 starts.  But winning is not foreign to the former UCLA player who has wins on the Hooters Tour, Tight Lies Tour, Gateway Tour and Spanos Tour.

The much heralded Michele Wie failed to make the cut for the LRTO and communicated with McLachlin, her fellow Honolulu, HI native, via cell-phone texting.

“Yes, we texted back and forth on Friday. She texted me, "Great playing." And I texted back to her that I thought she played well for 27 holes. That one of these days she is going to get it done and make the cut out on TOUR, and that I believed in her. And then I wrote a funny one back to her, because I beat her by 18 shots that day. I said, "Does this mean I have to give you a shot a hole the next time we play"?

McLachlin earns 2,250 FedExCup points to move to No. 47 in the FedExCup standings, with 5,502 points and improved his world golf ranking from 258 to 163.  With the win, he earns a spot in this week's PGA Championship.