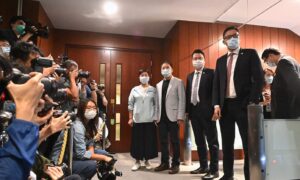 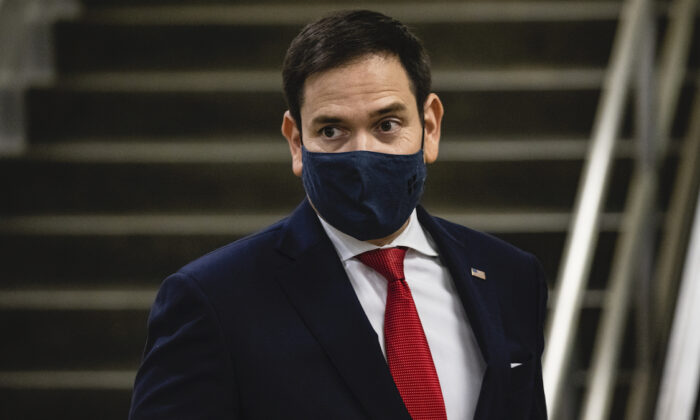 Sen. Marco Rubio (R-Fla.) walks through the Senate subway following a vote in the Senate at the U.S. Capitol in Washington, on Nov. 12, 2020. (Samuel Corum/Getty Images)
Politics

McKinsey Under Pressure for Its China Ties

Headquartered in New York City, the consulting company has offices in more than 130 cities across 65 countries, including China.

In the letter, Rubio raised concerns about the firm’s business dealings with the Chinese Communist Party (CCP), including state-owned and state-run enterprises in China. He also raised questions as to whether the U.S. government should continue to work with McKinsey.

“I remain concerned that McKinsey & Company—either wittingly or unwittingly—is aiding the CCP’s attempt to supplant the United States and remake the international community in its own image,” Rubio stated in the letter, which was addressed to Kevin Sneader, the company’s global managing partner.

“We must ensure that firms working on behalf of the United States Government and U.S. companies are putting America’s interests first. McKinsey’s inability to provide clear, direct answers only exacerbates those concerns and raises serious questions as to whether our government—including the Intelligence Community—should continue to use McKinsey’s services.”

The letter was a follow-up to a previous letter dated June 17. Rubio received two separate responses to his original letter in July and August from Liz Hilton Segel, the managing partner for McKinsey’s North America operations.

“Neither letter, despite their length, sufficiently addresses the purpose of my original correspondence,” Rubio wrote in the follow-up correspondence, demanding direct answers to his questions.

McKinsey initially responded that the Chinese regime or CCP hadn’t been a client of the company. But its second letter to Rubio acknowledged the work for state-owned enterprises. The company also conceded that it advised “local and provincial governments” in China.

In the letter, Rubio questioned whether McKinsey was taking precautions to ensure its clients in China aren’t engaged in “grotesque human rights abuses” and are “not controlled by the Central Military Commission of China.”

Rubio also criticized McKinsey for declining to provide information about its clients in China that “work in areas of critical national interest to the United States, including health care, pharmaceuticals, health care equipment and supplies, telecommunications, and military or civil defense.”

The company declined to respond to Rubio’s earlier request by stating, “Given the firm’s contractual and professional obligations to maintain confidentiality, McKinsey is not able to provide information on specific clients or engagements.”

The consulting firm indicated that it’s worked with “over 50 U.S. government departments and agencies, including those involved in defense, intelligence, and other elements of national security.”

In 2018, a New York Times article presented the deep ties between McKinsey and the Chinese regime.

Two years ago, the company held its retreat in the Xinjiang city of Kashgar, near internment camps where the U.S. State Department says more than a million Uyghurs and other Muslim minority groups are held without charge.

According to the article, McKinsey has helped advance Beijing’s signature policies, including the Belt and Road Initiative (BRI, also known as One Belt, One Road).

The Trump administration has been a vocal critic of BRI, China’s ambitious international-development plan. It has been particularly concerned about how the BRI is a “debt trap” for many emerging countries.

Given the company’s role in the BRI, Rubio asked, “How can the U.S. government and American companies be confident the advice it receives from McKinsey is not compromised by the company’s work with the CCP and other Chinese interests?”

McKinsey is also an adviser to the World Health Organization, having recently aided the WHO in its “efforts to coordinate and share information across countries regarding the pandemic,” according to the letter.

Rubio denounced the WHO for spreading misleading information about the coronavirus outbreak and presenting the CCP’s response in a positive light. He also criticized the WHO for preventing Taiwan from participating in a critical global health meeting because of objections from Beijing.

Rubio asked whether McKinsey was involved in the exclusion of Taiwan or the CCP’s spreading of misleading information about the coronavirus.

Given the CCP’s systematic infiltration of private companies, the letter also demanded information about any Party members within McKinsey.

“In official Chinese newspapers, McKinsey employees have claimed to lead party branches within the company’s offices in China,” the letter said.

McKinsey in August responded that it was “unable to answer” because the company doesn’t “track the private political affiliations of its employees.”

“This answer suggests a profound misunderstanding of how the CCP operates,” Rubio wrote back. “This is not a matter of employees’ voluntary involvement in civic organizations, but rather the CCP’s involvement in McKinsey’s operation.”

McKinsey didn’t immediately respond to requests by The Epoch Times for comment.