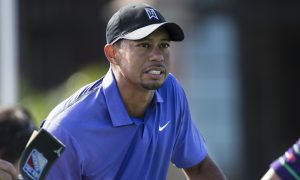 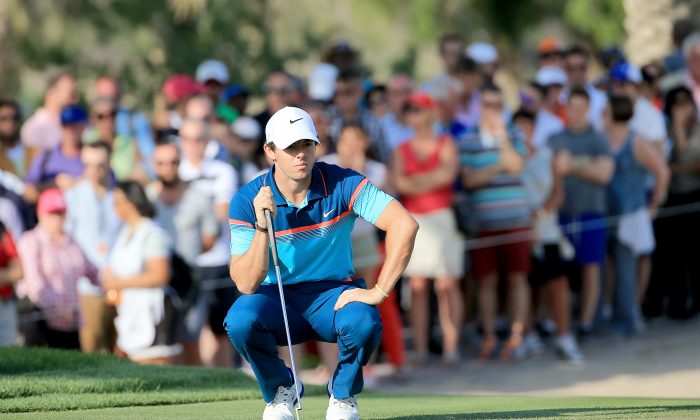 Rory McIlroy of Northern Ireland lines up a putt on the par 3, 15th hole during the final round of the 2015 Omega Dubai Desert Classic on the Majlis Course at the Emirates Golf Club on February 1, 2015 in Dubai, United Arab Emirates. (David Cannon/Getty Images)
Golf

Being No. 1 in any sport automatically means a focal point of extreme attention. As the planet’s top golfer, Rory McIlroy is now having to come to terms with the level of intense scrutiny that for many years was the sole concern for Tiger Woods.

The 25-year-old Ulsterman played his first stop on the PGA Tour last week at the Honda Classic at PGA National and promptly exited after two lackluster rounds of 73–74, his first missed cut since the 2013 Open Championship at Muirfield. Interestingly, to showcase the differences between Woods and McIlroy in terms of cuts made and missed, Woods has missed only 12 cuts in his professional career, which commenced near the end of 1996. This coming from a total of 318 PGA Tour starts and with four of those cuts happening in the last two years. McIlroy, on the other hand, has 12 missed cuts in just 88 PGA Tour starts.

The current No. 1 player is well aware a date with immortality rests in April at The Masters at Augusta National in little over a month’s time. Rory won the final two majors of ’14 with wins at The Open and PGA. Claiming of his first green jacket would mean the completion of a career Grand Slam, becoming the second youngest—behind Tiger Woods—to have won all of the game’s four premier titles and becoming just the sixth man ever to accomplish that monumental feat joining, besides Woods, the likes of such herculean golf heavyweights as Gene Sarazen, Jack Nicklaus, Gary Player, and Ben Hogan.

Coming into his 2015 PGA Tour debut, McIlroy had won just a few weeks prior the Omega Dubai Desert Classic and seemed clearly poised to continue the momentum. Serious wind velocities coupled with water hazards lurking at the Jack Nicklaus-designed Champ Course caused McIlroy serious issues as well as a host of other top names.

Like all great golf champions, McIlroy quickly placed that failure in his rearview mirror. This past Monday, he fired a 63—low round in the gross division of the Pro-Member event held each year at the prestigious Seminole GC in North Palm Beach, roughly an hour’s drive north of Trump National Doral.

McIlroy was ranked No. 1 earlier in his career and then went through a significant drought period for much of 2013. Part of that was tied to his breaking off of an engagement to women’s tennis star Caroline Wozniacki. Other reasons were tied to a new equipment contract with Nike in which Rory completely changed his entire club line.

But this time around, McIlroy has the capacity for a banner year in which his position at the top of the golf pecking order will be as cemented at the top as was Woods’s during his prime playing years. A civil lawsuit from his former management company was settled a short time ago, and it appears Rory is now more comfortable in being at the top of the golf hierarchy. No question other players want that same position. Names such as former No. 1 Adam Scott and fellow Aussie Jason Day have both signaled a keen desire to displace McIlroy. However, no player has shown the wherewithal to come remotely close to the four majors Rory has won to date.

On the highway of golf superstardom, McIlroy occupies a singular lane. The issue is, can he demonstrate a follow-up year to what he showed convincingly last year? That remains to be seen.

This week, 74 players will tee off at the famed Blue Monster Course and McIlroy will be looking to better his performance from a year ago—a tie for 25th. In three appearances prior to last year, he finished in the top 10 each time, but immortality as golf’s juggernaut isn’t about finishing well—it’s about being dominant. Showing others your agenda is the win column. Woods was ruthless in this regard—squashing players like road kill—causing cotton-filled mouths and golf-shoe-shaking intimidation.

Woods won even without his “A” game. McIlroy showed much in this regard when winning last year’s PGA Championship at Valhalla. When having played an indifferent final-round outward half, he struck the most definitive blow—a pinpoint 3-metal from 260 yards at the 10th hole, setting up a deafening eagle for all others to quake. Inevitably, Rory carted home his second Wanamaker Trophy. Winning with the lead is never easy, but demonstrating to others the wherewithal to win from behind is a crowning moment—one in which Woods has never done in claiming a major event.

The old saying that getting to the top is easier than remaining there is ever true. Golf is the most fickle of games—witness the pedestrian manner in which Woods has performed in recent times. McIlroy has been groomed for quite some time. He has demonstrated a flawless swing that produces elegantly under pressure when in top form. His putting can be spotty at times, but when on form he possesses another gear that no other player can match. Watching him send golf balls off the tee for both superior distance and uncanny accuracy is truly an art form. But inherent talent can only be fueled by restless ambition—never resting, never stopping. Woods did not measure his success in top tens, top fives, or runner-up finishes. Simply one word—wins.

This week at Doral marks another Tour event, but for McIlroy it is about making clear statements. That what he did last year is just the start of a long-time domination. Woods did not judge himself against the likes of Phil Mickelson, Ernie Els, or Vijay Singh. Just one name mattered—Jack Nicklaus. Rory is what Reggie Jackson said years ago during his NY Yankees tenure—”I’m the straw that stirs the drink.” McIlroy has never shown a desire to talk such rubbish, preferring his clubs and game to do what no other golfer—with the exception of Woods—can fathom.

Green-jacket immortality and a springboard for even more fanfare and adulation may come in the next few weeks. Rory’s mission is not a new one, but one only he among today’s players can walk. He ascended previously to No. 1 and came up short. He now has a second bite at the apple. Doral beckons—Augusta looms.