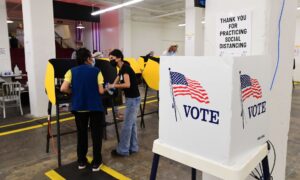 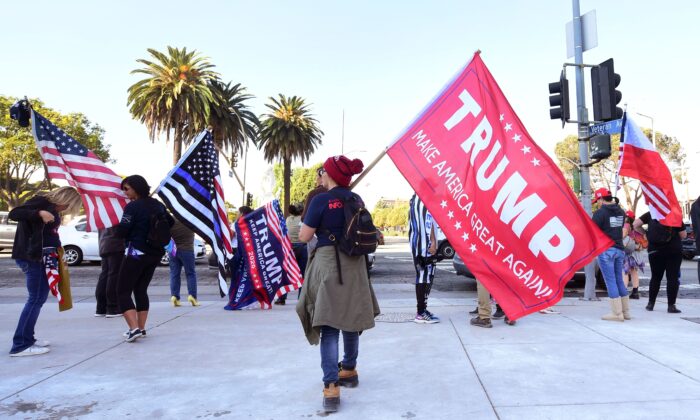 McEnany Predicts ‘Quite Large’ Turnout at Pro-Trump Marches in DC

“I think it’s going to be quite large, from what I’m hearing, don’t have an estimate for you, but people want to show up and have their voice heard,” McEnany said during an appearance on “Fox & Friends.”

Several events are planned, including a “March for Trump” and “Million MAGA March” in Washington on Saturday.

Reps. Mike Kelly (R-Pa.) and Louie Gohmert (R-Texas) are scheduled to speak, as is Marjorie Taylor Greene, Congresswoman-elect in Georgia, according to the March for Trump page.

“Democrats are scheming to disenfranchise and nullify Republican votes,” the page says. “It’s up to the American people to stop it. Along with President Trump, we will NOT back down to ensure the integrity of this election for the good of the nation. This is a coalition/team effort. We need boots on the ground to protect the integrity of the vote.”

“It is time that WE THE PEOPLE rise up and have our voices heard,” added Amy Kremer, co-founder of Women for Trump.

Democratic presidential nominee Joe Biden has declared victory in the 2020 election, but Trump’s campaign is engaged in legal battles across battleground states as they argue election fraud occurred and attempt to get courts to intervene.

The Epoch Times isn’t calling the race until the litigation is resolved.

Members of right-wing group Proud Boys and militias like the Oath Keepers are among those planning to attend, as are a raft of high-profile pro-Trump figures like activist Scott Presler and InfoWars host Alex Jones.

Counter-protests are also planned, with activists calling on people to take buses from other cities like New York.

Members of anarcho-communist network Antifa are among those saying they’ll be in Washington.

Antifa adherents and Proud Boys members have clashed before, including in Portland in September.

McEnany said the forecast of a large turnout stems in part from the number of votes Trump received.

“He has 72 million people who love him, who want to show up and support him. His base is strong. And there is no denying that this president is the titular head of our party for many decades to come and the enthusiasm of his base is something to behold,” she said. “I anticipate quite a large event this Saturday.”

But others weren’t as sure.

Christopher Rodriguez, director of the Homeland Security and Emergency Management Agency, told reporters on Thursday that the agency is tracking about a dozen groups.

“They’re very small. So I don’t want anyone to think that we’re talking about large numbers of folks. Very small groups of people from about a dozen groups will be in the District,” he said.

Washington Mayor Muriel Bowser, a Democrat, said officials are “concerned about making sure that we have safe First Amendment demonstrations.”

Groups are coming from both sides of the political spectrum, Rodriguez confirmed. He said the Metropolitan Police Department “is being very proactive in terms of the street closures,” in informing people they can’t bring weapons, guns, into the city, and that “violence will not be tolerated.”

City officials are prohibiting parking on a number of streets and warned of potential street closures because of the demonstrations.