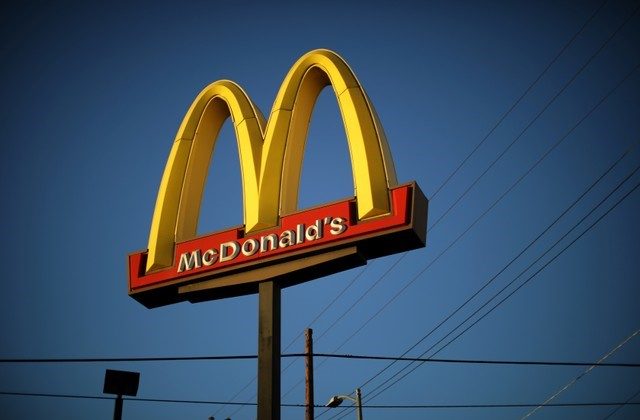 A stock photo of a McDonald's logo. (Reuters/Lucy Nicholson)
International

McDonald’s Worker With Down Syndrome Retires After 32 Years

A man with Down syndrome retired after working at Australian McDonald’s for 32 years, according to reports.

Russell O’Grady, 50, was dubbed “the best-known person in Northmead,” having worked at the chain since 1986, reported the New Zealand Herald. He began working there at just 18 years old after a government initiative was organized to help people with intellectual disabilities find a job.

For the next three decades, he worked three days per week cleaning trays, sweeping the floor, and greeting people.

Meet Russel O'Grady, a man with #Downsyndrome that has brought smiles to his community for the last 32 years. After years of working at his local @McDonalds, O'Grady is retiring – leaving a legacy of friendly service and hard work. https://t.co/RYvfgOaaqV

“We’ve got regular customers who come in to see Russell on Thursday and Friday, and the staff look after him, so we’re going to miss him,” McDonald’s supervisor Courtney Purcell said.

His father, Geoff O’Grady, told the Daily Mail that he’s become sort of a local celebrity due to his job at the restaurant. “People stop him on the street and shake his hand. He’s very affectionate, dearly loved and appreciated, to such an extent that we just don’t believe it,” he said.

“Somebody said to him ‘are you handicapped?'” and his answer was: ”I used to be when I went to school, but now I work at McDonald’s,” he said.

Fifty-year-old Russel O'Grady first took on the job in 1986, at the age of 18
https://t.co/zOUkCHyRbN pic.twitter.com/iDW97LwlVk

“It really helps him, he gets a lot of social interaction and makes him feel like part of the community,” Jobsupport trainer Nikita Vandaru was quoted by the Herald as saying. “When I watch him work, every second customer will stop and talk to him. He’s got a huge smile on his face every time they come.”

According to the Mirror, one person commented: “I’ve actually met Russell before. He is a very hard working young man, always with a smile on his face. Congrats on the retirement champion.”

O’Grady decided that retiring would be best for his health. He will now spend most of his time on his hobby, ten-pin bowling, at the Northmead Bowling Club.

Down or Down’s Syndrome?

The National Down Syndrome Society (NDSS) says “Down syndrome occurs when an individual has a full or partial extra copy of chromosome 21.” The NDSS also says it uses Down syndrome, rather than Down’s syndrome.

The syndrome was named after English physician John Langdon Down.

“This additional genetic material alters the course of development and causes the characteristics associated with Down syndrome. A few of the common physical traits of Down syndrome are low muscle tone, small stature, an upward slant to the eyes, and a single deep crease across the center of the palm—although each person with Down syndrome is a unique individual and may possess these characteristics to different degrees, or not at all,” according to the website.

It added: “For centuries, people with Down syndrome have been alluded to in art, literature, and science. It wasn’t until the late nineteenth century, however, that John Langdon Down, an English physician, published an accurate description of a person with Down syndrome. It was this scholarly work, published in 1866, that earned Down the recognition as the ‘father’ of the syndrome. Although other people had previously recognized the characteristics of the syndrome, it was Down who described the condition as a distinct and separate entity.”

Another McDonald’s Employee Made Record

Russell matched the 32 years of service achieved by another fellow McDonald’s employee with Down syndrome, Freia David.

Freia David, whose first name is pronounced “fry-a,” worked the fry station at a McDonald’s for 32 years, according to the Huffington Post.

David’s job at McDonald’s was “her life,” her mother Anneliese told the Boston Globe. David worked five shifts a week, arriving an hour early and sometimes even dancing in front of the fry station in anticipation.

Saturdays were her day off but even then, David would come into McDonald’s to eat lunch with her mom and give her friends high-fives and hugs.

David, 52, was closing in on 1 million pounds of fries served when her mother noticed that her daughter was showing signs of forgetfulness. Early onset dementia is common among people with Down syndrome and her mother worried about her safety around the fryer oil and heat lamps.

The job had meant everything to her but when she announced her imminent departure, how much she meant to the job instantly became clear.

The Davids expected just a few old friends to show up on her last day.

Instead, over a hundred people packed the McDonald’s—loyal customers, former neighbors, adults with disabilities, and their relatives—all were there to wish her well.

David was showered with gifts: two cakes, cards, photo collages, a silver necklace with a McDonald’s french-fry carton pendant, her favorite Disney stuffed animals, and a proclamation from the state House of Representatives.

“It was nice, I’m really happy,” David told WBZ-TV. “I like all my friends here.”

She started her job back in 1984. Even now after retiring, she still plans on popping in on the weekends just for a bite to eat.

“Bye, sweetie,” David’s manager Rony Sandoval told her at the end of her retirement party, reported the Globe. “See you Saturday.”