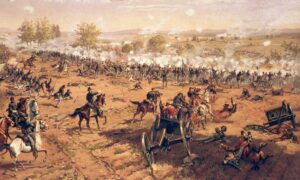 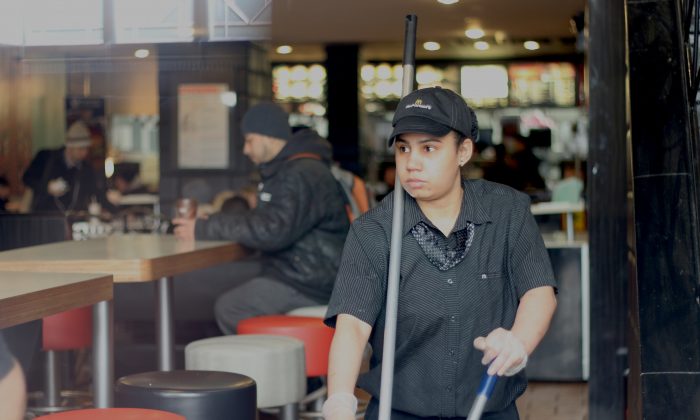 A McDonald's worker at a store across from the Empire State Building in New York on March 18, 2014. (ALLEN XIE)
Opinion

The fast-food chain's surprise decision to lift its workers' wages stems from a mix of morality, economics, and politics

On April 1, in an announcement that just a year or two ago might have been seen as an April Fools’ prank, McDonald’s said that by July 1 it would raise wages to at least one dollar above the local minimum wage in each of its 1,500 U.S. stores.

While this only applies to about 90,000 workers at company-owned restaurants, it puts pressure on the more than 3,100 McDonald’s U.S. franchisees, each running an average of about four stores each. These outlets have about 750,000 workers, who no doubt will clamor for their own pay hikes.

So why did McDonald’s do it, just a few weeks after Wal-Mart set off the wage-hike bandwagon among retailers?

At the heart of most arguments about the minimum wage lie franchising and fast-food businesses, with their high-volume, price-sensitive, customer-driven markets, and predominantly low-wage workforce. My research on the topic shows that the push to raise wages by McDonald’s can be attributed to the evolution of three separate themes—morality, economics, and politics—that have all been trending in favor of higher pay.

At the same time, the introduction of new automation technologies is requiring employees with higher skills—and pay. And the industry’s franchise nature may increase the pressure on others to follow McDonald’s lead.

Morality. Debates about a minimum wage for workers often focus less on whether the law should require it and more on what constitutes a “living wage,” a term increasingly used. If people agree that workers cannot sustain themselves and dependents under a certain wage and benefit level, then the moral argument becomes plain: they must receive something at or above that level, and a minimum wage pegged under that amount must be raised.

Debates about a minimum wage for workers often focus more on what constitutes a “living wage.”

Most people agree to higher wages due to these moral concepts, and this public consensus, while not yet a governing framework, certainly drives much of the debate.

Economics. It has long been contended that raising the minimum wage leads to job losses, reduced business growth, and less disposable income. However, some economic research suggests the opposite: that doing so offers positive economic benefits overall as workers at the lower rungs of the labor market have more money to spend, and businesses and consumers adjust to higher wages and costs for products or services.

Because legal requirements vary from jurisdiction to jurisdiction, the interesting questions involve how those differences affect local economic performance. Comparisons must account for many factors, with the mobility in labor and other markets as well as the price elasticity of supply and demand.

Historically, the lowest-paid jobs tend to be the most transitory.

Historically, the lowest-paid jobs tend to be the most transitory, making it harder for the workers to become politically active or organized. However, regardless of how it has happened, the ongoing protests for a higher minimum wage and the response in some states or municipalities (most prominently, Seattle’s June 3, 2014, ordinance raising the minimum hourly wage) have attracted much attention.

That in itself may be a victory for those seeking economic “justice.” It is part of a larger battle over compensation, extending to matters such as eligibility for overtime pay (to be greatly increased per new federal decrees) and efforts to tie CEO compensation relative to company performance and average pay.

Related to the minimum wage debate and, more generally, to societywide income division are two fundamental matters: the roles of technology and franchising.

In labor-intense economic sectors such as leisure and hospitality, the use of automation proceeds apace. Just as gas stations decades ago dramatically shed their labor forces as they moved to self-service, so restaurants may cut down greatly on their need for workers through the use of ordering and payment kiosks.

Fast-food workers may, in McDonald’s and elsewhere, be paid more and be expected to have a new set of skills working with the technology, but the number of workers per outlet may fall significantly. This is a development we can already see in its initial stage, and other job eliminators down the road seem likely, even if we cannot foresee the particulars.

Some jobs in service fields until recently were considered insulated from outsourcing but have, through technology, been made capable of greater production, usage of lower-cost labor, or both. Therefore, more jobs may be subject to truncation or at least global competition, with higher wage scales perhaps priced out of the market.

More than a third of all retail sales are through franchised outlets, and franchising is present in almost every industry imaginable, according to extensive research I’ve conducted on the topic. But it is one behemoth in the field—the fast-food sector—that likely springs to mind when one thinks of franchising.

The nature of franchising means McDonald’s treatment of workers could foretell what its competitors and franchisees may do. As McDonald’s expects more from its workers, and pays them more, presumably other fast-food networks will have to raise their wages or concede to the Golden Arches a high portion of the more productive, perhaps longer-term employees, as well as customer and community goodwill.

The Need for a National Debate

Many argue that the current minimum wage is high enough, and that market forces should dictate pay. McDonald’s actions, however, seem to undermine the argument that wage scales already fairly reflect what employees should be paid. The company’s announcement could also signify genuine wage growth generally, after many years of little change.

The political and moral pressure put on McDonald’s and other retailers shows that companies are now considering these perspectives as well as the economics when determining wage scales. Even more important than the moves to change a particular minimum wage under state or local law is the national discussion about how to ensure a “living wage” for all workers.

Robert W. Emerson is the Huber Hurst Professor of Business Law at the University of Florida. This article was previously published on TheConversation.com.