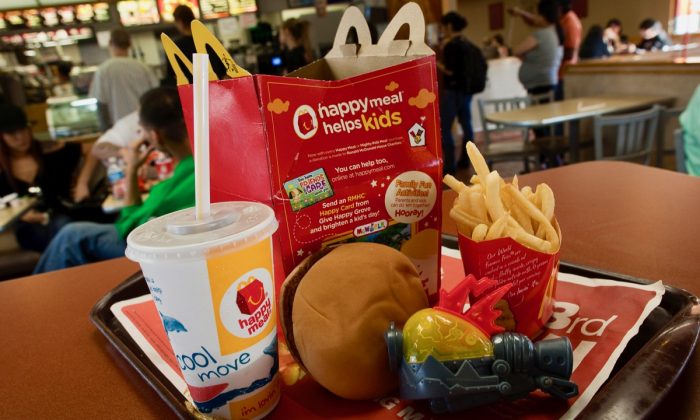 A photo illustration of a Happy Meal at McDonald's on Nov. 3, 2010, in San Francisco. (David Paul Morris/Getty Images)
US News

McDonald’s announced it would resume offering Disney toys in Happy Meals after a 12-year hiatus.

Disney pulled out of its deal with McDonald’s due to McDonald’s not meeting Disney’s food health standards, according to ABC 7. At the time, Disney felt McDonald’s meals aimed at children were too high in sodium, fat, and sugar.

A press release from McDonald’s cites the new food standards at Disney as starting in 2006 and then upgraded in 2012.

“All food and beverage products advertised, sponsored, or promoted on Disney-owned TV channels where more than 25 percent of the audience is ages 12 and younger, and online platforms that are directed to children and families, are required to meet Disney’s nutrition guidelines,” wrote McDonald’s.

The renewed partnership is scheduled to start in June. The first set of toys that will go into Happy Meals will be based on movies “Incredibles 2” and “Ralph Breaks the Internet: Wreck-It Ralph 2,” ABC 7 reported.

In the time since the two companies last worked together, Disney has made multiple high-profile acquisitions. Among its many properties, Disney holds the rights to Marvel Entertainment, best known for their Avengers superhero-themed movies, and Lucasfilm, the company that created “Star Wars,” according to Crunchbase. Disney is also in the process of acquiring major properties of 21st Century Fox, though negotiations have grown complex due to competition for some of Fox’s properties from Comcast, Quartz reported.

.@Disney is returning to @McDonalds Happy Meals with New Alliance
This multi-year deal will begin in June with #Incredibles2 followed by #RalphBreakstheInternet in November, but will also include promotional tie-ins to select @DisneyAnimation @DisneyPixar @Marvel & @StarWars pic.twitter.com/9M33EZ2bWP

McDonald’s also announced in the press release that it would fall in line with Disney’s nutritional standards by reducing calories, saturated fats, sugar, and sodium in many of the children’s meal combinations on offer.

McDonald’s listed markets outside the United States that will also benefit from the renewed partnership. McDonald’s restaurants in Puerto Rico, Aruba, Curaçao, St. Thomas, St. Croix, Samoa, Suriname, the Dominican Republic, and Trinidad will all get access to the new toys.

“McDonald’s commitment to balanced Happy Meals allows our two companies to collaborate on new ways to bring the magic of Disney to McDonald’s consumers,” said Tiffany Rende of The Walt Disney Company, via the press release.