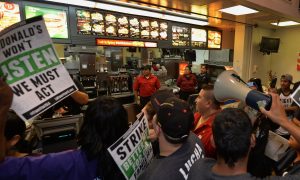 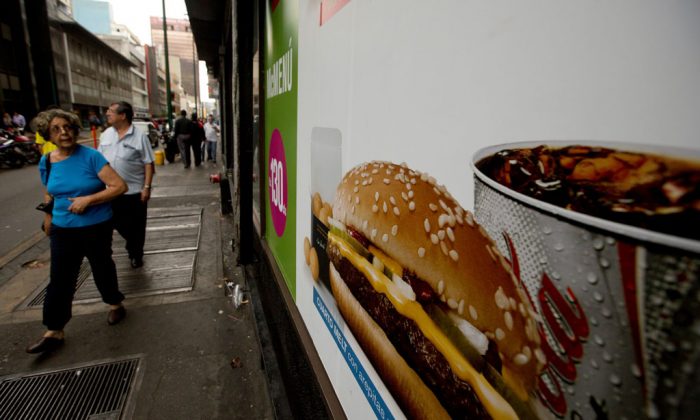 A customer glances at a McDonalds' banner menu showing a burger accompanied by arepas or corn cakes, instead of fries, in Caracas, Venezuela, Tuesday, Jan. 6, 2015. McDonald’s franchises in Venezuela have run out of potatoes and are now serving South American alternatives like deep-fried arepas or yuca, a starchy tuberous root. The franchisers are blaming a contract dispute with West Coast dock workers for halting the export of frozen fries to the country. (AP Photo/Fernando Llano)
Business

McDonald’s Runs Out of French Fries in Venezuela

CARACAS, Venezuela—Forget the French fries. How about a side of yuca with that Big Mac?

Venezuela’s more than 100 McDonald’s franchises have run out of potatoes and are now serving alternatives like deep-fried arepa flatbreads or yuca, a starchy staple of traditional South American cooking.

McDonald’s is blaming a contract dispute with West Coast dock workers for halting the export of frozen fries to the country. The dispute also caused several days of French fry rationing in Japan last month. But Sonia Ruseler, an Argentina-based spokeswoman for Arcos Dorados, which runs McDonald’s restaurants in Latin America, declined to say Tuesday why Venezuela’s neighbors are not suffering from similar scarcity.

Accustomed to shortages of their favorite foods, and equally in the habit of grumbling about the government as they walk away empty-handed, many Venezuelans assume the embattled socialist administration is to blame.

“It’s because of the situation here; it’s a total debacle,” said Maria Guerreiro, who huffed out of a Caracas McDonald’s with her family when she found out they were serving only fries made of yuca, which is also known as cassava. Her daughter won’t eat the super-starchy root, she said, and they’d come for the sole purpose of treating the two-year-old to a Happy Meal.

Ruseler said the corporation is working to resolve the shortages, and in the meantime, “will continue to give our clients the McDonald’s experience, offering 100 percent Venezuelan options.”

John Toaspern, chief marketing officer with the US Potato Board, noted that Venezuela’s import of frozen potatoes fell off a cliff long before the labor dispute escalated. During the first 10 months of 2014, the country imported just 14 percent of the frozen fries from major McDonald’s supplier Washington State it brought in for the same period the year before, according to federal data compiled by the board.

Most of the shortages in Venezuela are driven in part by the country’s tight currency controls, which make it hard to get dollars at a subsidized rate for imports while creating a thriving black market for currency. As a result, the country either has the most expensive Happy Meal in the world ($27 the official exchange rate) or the cheapest (90 cents at the black market rate).

While McDonald’s may be the ultimate symbol of U.S. capitalism, the socialist government seems acutely aware that Venezuelans relish their Happy Meals. A state-sponsored news website posted a story this week assuring the situation “has nothing at all to do” with government policy.

At the Caracas McDonald’s, a man wearing an “employee of the month” cap braved the dinner rush Monday, patiently explaining to patron after patron that instead of French fries, the store was offering yucca fries, mini-arepas, or salads.

Nonplussed customers sampled their pale yuca fries tentatively as they picked up their orders. No one choose the salad.