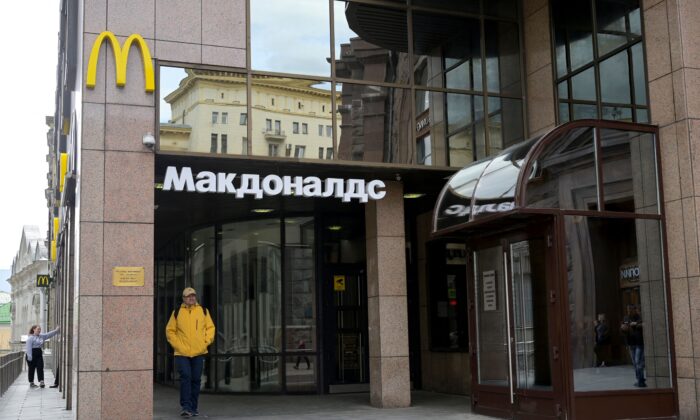 A man walks past a closed McDonald's restaurant in Moscow on May 16, 2022. (Natalia Kolesnikova/AFP via Getty Images)
Companies

McDonald’s announced on Monday that it would be permanently closing its 850 franchises in the Russian Federation, ending over three decades of engagement with the Russian market and signifying Russia’s increasing isolation from the global economic community since President Vladimir Putin’s authorization of the invasion of Ukraine.

After more than thirty years of operating within Russian borders, McDonald’s has officially begun to sell its properties within the nation, citing humanitarian, legal, and financial concerns about the company’s involvement in Russian markets.

“For the first time in our history, we are ‘de-Arching’ a major market and selling our portfolio of McDonald’s restaurants,” said McDonald’s executive Chris Kempczinski in a letter to employees and franchisees. “They will no longer carry the McDonald’s name or serve our menu. The Golden Arches will shine no more in Russia.”

McDonald’s had previously suspended its operations in Russia in March, ostensibly on a temporary basis, in response to the country’s invasion of neighboring Ukraine in February. Almost immediately, the void of McDonald’s was filled by local knockoffs. Chief among these was “Uncle Vanya,” whose logo consists of the Cyrillic character “В” in yellow against a red background—a straightforward reference to the “Golden Arches” of McDonald’s, albeit rotated and adapted to the local language.

Russia is not the only country to see knockoffs of American brands flourish in the absence of American capital. Such copycats have a long and often strange history in countries as diverse as China, Iran, and Thailand, all of which have been home to kitschy localized imitations of familiar chains and franchises such as Pizza Hut, Starbucks, and Kentucky Fried Chicken.

When McDonald’s first opened in Moscow in 1990, during the final years of the Soviet Union, it was heralded by media worldwide as a symbol of Russia’s future integration within the capitalist economies of the West. While local and international media speculated that the Pushkin Square McDonald’s franchise might not last long under the crushing burdens of Soviet bureaucracy, the restaurant was swarmed with crowds on its opening day, and it continued to operate until earlier this year—long outlasting the communist state under which it was established.

Now it appears that history has, at least to some measure, been reversed, as increasing tensions between Putin’s Russia and the Western bloc are driving a mass exodus of American capital in the massive Slavic nation. While Russia shows few signs of reverting to a Soviet-era command economy, Western businesses have responded to the invasion of Ukraine by withdrawing from Russian markets. Though McDonald’s is not the most geopolitically or economically significant company to retreat from the Russian Federation, it is richly symbolic of the end of an era of cautious flirtation between American capitalism and the former Soviet Union, straddling the boundaries between Europe and Asia.