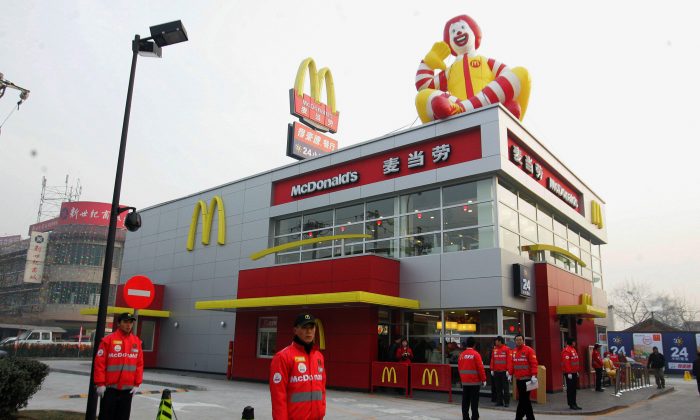 Chinese staff wait for the first customers at the opening of a McDonald's drive-thru outlet built next to a gas station in Beijing on Jan. 19, 2007. McDonald’s, after announcing that it would change its name in China, drew ridicules on Chinese social media. (STR/AFP/Getty Images)
Social Issues

When news broke that McDonald’s in China will be called something else, tens of thousands of Chinese internet users went on overdrive, their creativity going wild.

On Oct. 26, McDonald’s China announced that it will change its registered business name to Golden Arches (China) Co. Ltd. The company issued a statement saying that it wanted a name more relevant to the local culture.

Its current Chinese business name is a direct transliteration of “McDonald’s” into Chinese characters that have no real meaning. The company’s brand name, however, will remain unchanged, meaning that customers will still see McDonald’s and its logo on restaurant signage, menus, and other items.

The name change was not totally unexpected, given how in January, the company sold controlling stakes in its China operations to a group of investors, led by Chinese state-owned investment company Citic. According to the Associated Press, Citic owns 52 percent of the business, while The Carlyle Group, a private-equity firm based in Washington, D.C,. owns 28 percent, and McDonald’s holds 20 percent.

McDonald’s has a long history of using golden arches as its logo. But when translated into Chinese, the name didn’t go over so well with Chinese netizens, who took the opportunity to have some light moments with posts on Weibo, China’s Twitter-like microblogging service.

They noted that the literal Chinese translation, “gold arched door,” sounds quite old-fashioned. The use of “gold” in a name sounds gaudy, while the first Chinese character in “arched door” sounds similar to a pig’s snort.

The comments on McDonald’s new business name produced this popular catchphrase on Chinese social media: “Child, your uncle is not the uncle you have known all these years. But your da ye (elder uncle) will always be your da ye.”

“Uncle” refers to Ronald McDonald, and “da ye” means Colonel Sanders, the symbol for KFC’s (Kentucky Fried Chicken) brand. The quote has been a fun way for Chinese netizens to compare the two fast-food restaurants.

Some netizens took it a step further, with a conspiracy theory that KFC had successfully infiltrated McDonald’s, because McDonald’s new name was so poorly chosen.

Other netizens questioned who came up with the awkward name; some suggested that the company changed its name after seeking advice from a feng-shui master; others concluded the company would soon lose its Chinese market with such a poor name.

On McDonald’s official Weibo page, the company’s post announcing that only its business name would be changed drew over 12,000 comments by netizens, most of them happy that they would still see the old name.

Some netizens, besides having a good laugh at McDonald’s new name, have decided to take the opportunity to suggest alternative names for other foreign companies, whose names are currently direct transliterations of the English name into Chinese.