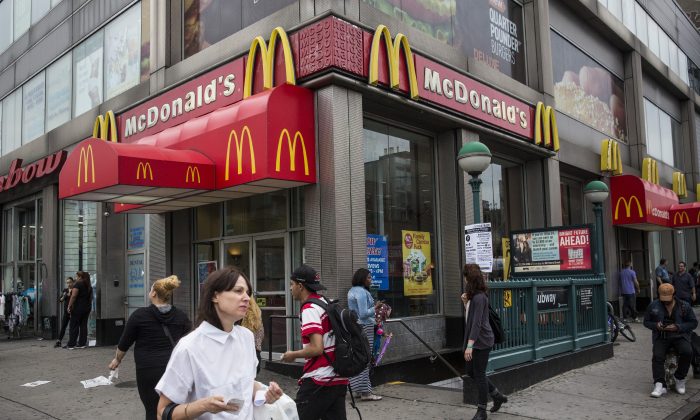 Articles saying “human meat” or in other instances, “horse meat,” were found at a McDonald’s “meat factory” are fake.

The original article can be traced back to Huzlers.com, a “satire” website. The article was later taken down but it can be accessed via Archive.org.

The bogus article reads: “Meat inspectors reportedly found, what appeared to be, Human meat stored in the meat factory freezers of an Oklahoma City meat factory and human meat already in trucks right outside the factory ready to be shipped to McDonald’s restaurants. Health inspectors immediately demanded inspection in various McDonald’s meat factories across the country and horrifyingly found human meat in about 90% of the factories inspected thus far.”

However, the article was cited on another website, NYMeta.org. It includes fake quotes by FBI agent Lloyd Harrison.

At the bottom of each Huzlers page, it has a disclaimer, which says it’s satire.

“Huzlers.com is a combination of real shocking news and satire news to keep its visitors in a state of disbelief,” it reads.

There’s been other rumors over the years about McDonald’s using “worm filler” or “horse meat,” but those are also unsubstantiated.

“In April 2014, the “worm burger” rumors were revived when the faux news site Daily Buzz Live published an article (reproduced above) recycling that and several other old McDonald’s-related urban legends, accompanied by an unrelated photograph of ground beef mixed with pats of frozen butter that coincidentally resemble worms,” hoax-debunking site Snopes.com says.

“For the record, not only is the worm additive rumor untrue, but McDonald’s also does not purchase and use cow eyeballs, skirt the law by buying adulterated meat from a company misleadingly named ‘100% Beef,’ or put yucky stuff like styrofoam balls and feathers in their milkshakes.”