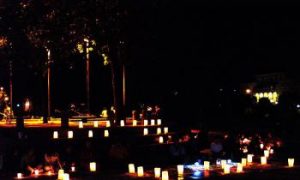 Downtown Madison Lights Up for Human Rights in China
0 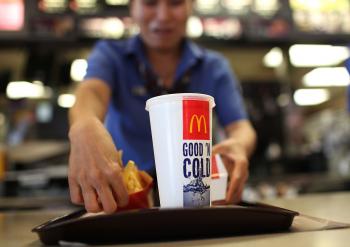 A McDonald's employee prepares an order during a one-day hiring event at a McDonald's restaurant on April 19, 2011 in San Francisco, California. (Justin Sullivan/Getty Images)
US

By David Sabatini
Print
Job seekers looking for a career under the Golden Arches were offered an opportunity on Tuesday to work for McDonald's, the world’s largest hamburger fast-food restaurant chain, on the company's National Hiring Day.

McDonald's seeks to hire up to 50,000 new employees just in time for the summer season.

"We believe the best people in the world work right here. And we believe you could be one of them," McDonald's said on its Careers page of its website. "You’ve got enthusiasm, responsibility and drive. We’ve got flexible schedules, benefits and jobs that can turn into satisfying careers. It’s a perfect match."

According to media reports, people of all ages applied for various positions including the most basic cleaning and food service positions, as well as managerial and support positions. Applicants submitted their applications online and in person at 2,600 McDonald’s franchise restaurants across the country.

McDonald's future employees were asked to turn in a job assessment survey of 35 questions. Applicant Sonia Delgado, 42, told the Chicago Sun Times that she put on her application that she enjoyed working at Kentucky Fried Chicken when she was younger in her native country Puerto Rico.

“Every job is a door opening, if you love what you do, you can go anywhere,” Delgado said.

The fast food chain has been criticized over their products, primarily hamburgers, cheeseburgers, sodas, and sugary shakes and desserts and their effect on people’s health. In the wake of growing obesity among children and the recent economic downturn, however, McDonald's adjusted its food menu by offering healthier food alternatives including salads and fruit.

In California, McDonald's is being sued by a prominent watchdog consumer group and a California mother of two for using toys and luring small children into consuming McDonald’s Happy Meals.

The group disagrees with McDonald’s marketing strategies of using toys of famous cartoon characters to push their Happy Meals onto young people who are especially vulnerable to the messages of advertisements. Monet Parham, from Sacramento, Calif. filed the lawsuit against McDonalds in December. She was supported by the Center for Science in the Public Interest, a nutrition advocacy group.

"What kids see as a fun toy, I now realize is a sophisticated, high-tech marketing scheme that's designed to put McDonald's between me and my daughters," Parham was quoted as saying by CBS News in December.

McDonald's defended its products saying in a statement regarding the lawsuit that the company has a 30-year record of providing a fun experience for kids and families at their restaurants.

In recent years, McDonald's has reported continuing trends of growing revenue domestically, as consumers chose less expensive eating options. At the same time McDonald's has performed well and the company's profits have grown in emerging markets such as China, India, and Latin America.

McDonald's also generates revenue by franchising its restaurants and collecting fees and royalties based on a percent of sales in its franchises. Currently the company operates in over 32,000 locations in 110 countries world-wide.