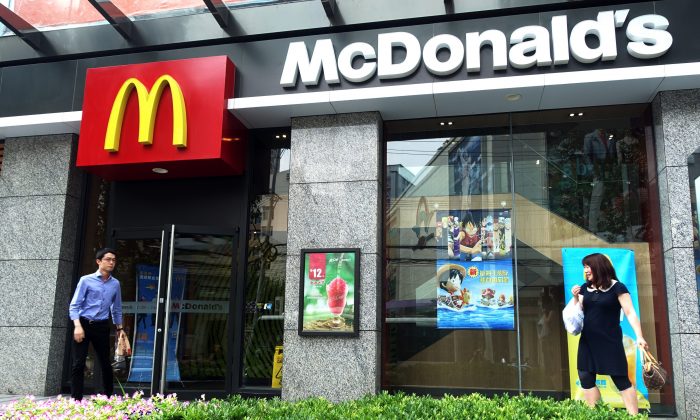 People walk by a McDonald's restaurant on July 28, 2014 in Shanghai. McDonald's is finalizing a sale of the rights to run its Chinese restaurants. (Johannes Eisele/AFP/Getty Images)
China

McDonald’s is finalizing a sale of the right to operate its China and Hong Kong restaurants. Prompted by stagnating market share and an increasingly challenging operating environment, the move allows McDonald’s to keep a presence in China without the burden of ownership.

With the sale, McDonald’s Corp. joins fast-food rival Yum Brands Inc. in making the decision to sell its China business. Yum, which owns KFC, is the No. 1 fast-food chain in China; McDonald’s is a close second. Both arrived on the scene in the 1980s—KFC opened its first outlet in Beijing’s Tiananmen Square in 1987, and McDonald’s opened its first store a few years later in the southern city of Shenzhen.

Their decision to abandon one of the world’s biggest fast-food markets marks a dramatic about-face for the two fast-food giants, once hailed as prime examples of how American companies can succeed in the communist country.

But the companies diverge in their methods of exiting China.

Yum chose to spin off Yum China as a separately listed company on the New York Stock Exchange. Yum China recently secured prominent Chinese investors Primavera Capital and Ant Financial Services Group as anchor investors ahead of the listing in November. Primavera was founded by the former head of Goldman Sachs Group Inc.’s Greater China business, and Ant is a subsidiary of internet giant Alibaba Group. Well-known anchor investors are common in Chinese IPOs, and their presence can help drum up interest from retail investors ahead of the listing.

McDonald’s, meanwhile, chose a different path. Instead of selling the business altogether, McDonald’s is converting its corporate-owned outlets to the franchise model by selling a 20-year franchise operating agreement to run all of the stores to potential bidders. This ensures that McDonald’s will hold branding and product development rights over existing and new restaurants, similar to its relationship with franchisees in the United States.

The 20-year operating license for McDonald’s Chinese outlets could fetch as much as $3 billion, analysts predict.

Both McDonald’s and Yum have lost their early luster and are facing declining market share in China.

Since 2010, Yum’s share of China’s fast-food market has declined from 39 percent to 23.9 percent in 2015. During the same period, McDonald’s market share dropped form 15.1 percent to 13.8 percent, according to market research firm Euromonitor.

Yum has about 8,000 outlets in China, mostly consisting of KFCs and Pizza Huts, contributing to half of its global revenues and profit. McDonald’s has 2,200 locations in China. While both companies opened new locations last year, their market shares have dropped.

McDonald’s and Yum are two of the world’s most successful fast-food chains and have around 30 years of experience in China. So what’s causing the market share decline in recent years?

The main challenge is shifting consumer taste. During McDonald’s and Yum’s early years in China, Western cuisine was scarce, and unlike in the United States where fast food is cheap and low-quality, McDonald’s hamburgers and KFC fried chicken were considered gourmet fare. Chinese consumers visited these restaurants during special occasions, and their prices were comparatively high.

In recent years as median Chinese income has risen, consumers have also developed more selective tastes and are increasingly moving upmarket in their restaurant preferences. American fast-food brands now operate in the price segment of the casual-dining restaurants. On the lower end of the market, however, the fast-food segment is increasingly being occupied by a new wave of local competitors selling Chinese food, Japanese food, and fried chicken at lower prices than American fast food.

Another significant hurdle facing McDonald’s is the Chinese Communist Party’s economic and competition policy, which in recent years has favored domestic businesses while marginalizing foreign competitors.

For McDonald’s and other foreign companies, outsourcing the operational aspect of running the business resolves most of these issues inherent in China. The same factors are also major drivers behind Wal-Mart’s sale of its Chinese e-commerce business Yihaodian to JD.com, and Hewlett-Packard’s sale of a majority stake of its Chinese networking business to local state-owned H3C Technologies.

Given this backdrop, McDonald’s is wise to cede ownership of its Chinese stores to local partners. The move could bring stable income from royalties, higher growth potential, and better treatment than it would otherwise be able to manage on its own, while the company still enjoys prominent brand presence.