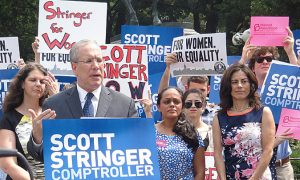 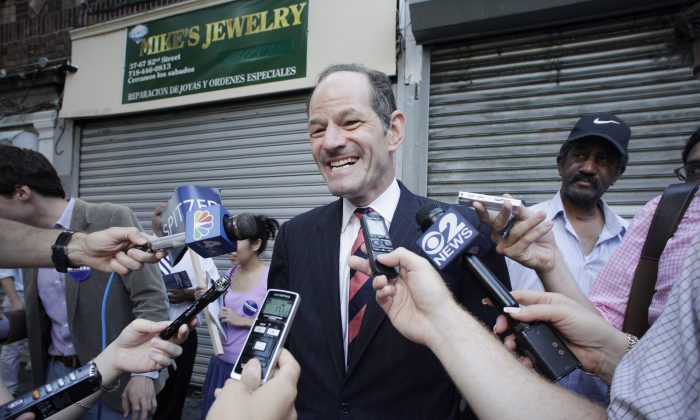 Eliot Spitzer, center, a candidate for New York City comptroller, talks with members of the media as he campaigns in the Jackson Heights neighborhood of the Queens borough of New York, Tuesday, July 23, 2013. (AP Photo/Mark Lennihan)
New York

NEW YORK—Eliot Spitzer cannot count many local politicians among his supporters, and mayoral candidate George McDonald added his name to that list on Thursday.

McDonald, who is vying for the Republican nomination against Joe Lhota and John Catsimatidis, vowed if he is elected mayor and Spitzer is elected to the office of comptroller, he would cut the budget of the comptroller’s office in half.

“Elliot Spitzer has repeatedly and knowingly broke laws ranging from human trafficking to illegal money transfers. He has abused the power of the state police and chased away jobs and opportunity for New Yorkers with his witch hunts against Wall Street—it is clear he requires strict and constant oversight,” McDonald said in a statement.

Spitzer resigned from the governor’s office in 2008 after he was found to have visited a prostitute while in office. He shocked the political world by entering the comptroller’s race in July and will face current Manhattan Borough President Scott Stringer in the September 10 primary.

In fiscal year 2014 the Office of the Comptroller was nearly $76 million with a staff of over 700, according to the statement.

When asked about the impact it may have on jobs and services, McDonald spokesman David Catalfamo said the cut would be a starting point in the budget process.

“What George is articulating is clearly Spitzer would need some controls on him because he has demonstrated, through his actions, he is incapable of being trusted without some oversight,” Catalfamo said by phone Thursday.

When asked about the potential job loss or loss of service due to the budget cut, Catalfamo said it clearly could have some impact, but because Spitzer has demonstrated his abuse of power as governor, the constraints were necessary.

Even with half of a budget, Spitzer would still be using taxpayer’s money, albeit just less. Catalfamo believes the limited funds would force Spitzer to behave.

“If might be more difficult to abandon those things which are most central to the office with a smaller budget,” Catalfamo said. “That is really the point, to try and constrain Spitzer and do it in a way where he needs to be responsible and accountable and does not have free reign.”