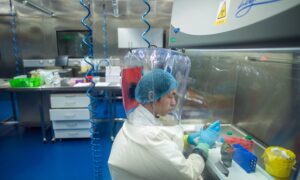 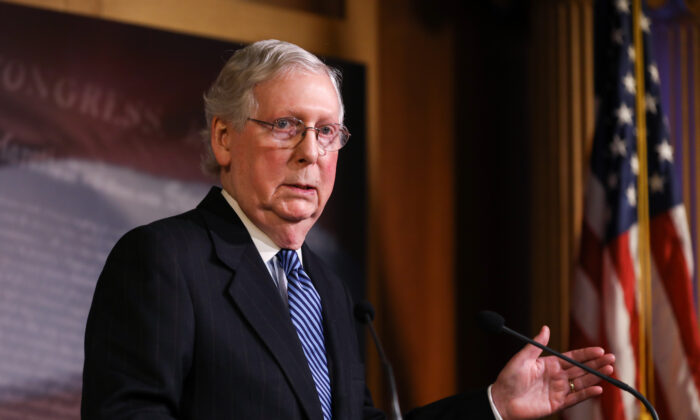 Senate Majority Leader Mitch McConnell (R-Ky.) said on Wednesday that he supports letting states declare bankruptcy as their budgets face a spending crunch amid the pandemic, rather than go down the road of more federal deficit spending.

“I would certainly be in favor of allowing states to use the bankruptcy route. It saves some cities. And there’s no good reason for it not to be available,” McConnell said in an interview with radio host Hugh Hewitt.

“My guess is their first choice would be for the federal government to borrow money from future generations to send it down to them now so they don’t have to do that,” the Kentucky senator said. “That’s not something I’m going to be in favor of.”

McConnell added that in talks with Democrats on more federal aid to states, Republicans will push for accountability.

“We’ll certainly insist that anything we’d borrow to send down to the states is not spent on solving problems that they created for themselves over the years with their pension programs,” McConnell said, adding that any additional federal assistance to state and local governments would need to be “thoroughly evaluated.”

Last month’s historic $2.2 trillion relief bill allocated $150 billion to state and local governments, whose budgets are creaking under the strain of the economic fallout from the outbreak of the CCP (Chinese Communist Party) virus, the novel coronavirus that causes the COVID-19 disease.

“Many states are already reporting precipitous declines in revenues that fund state services in health care, education, public safety, transportation, and other vital programs,” said leaders of the National Governors Association (NGA) in a Tuesday letter to Senate and House leadership of both parties.

On Tuesday, the Senate passed a $483.4 billion economic relief measure that would replenish the popular small business loan program that has run out of money and boost funding for hospitals to ramp up COVID-19 testing. The Senate’s voice vote sends the bill back to the House for final passage, expected to take place on Thursday. But the bill does not include any new funding for state and local governments, which Democrats pushed for in negotiations.

Democratic leaders have said more state and local government funding is a top priority for the next COVID-19 relief bill and President Donald Trump expressed openness to new funding in a subsequent relief measure.

Trump said in a tweet that items left out of the $483.4 billion economic relief bill, like payroll tax cuts, infrastructure initiatives, and fiscal relief to state and local governments for lost revenues from COVID-19, could be included in the next round of aid.

In the letter, which was signed by NGA Chairman Larry Hogan, Republican governor of Maryland, and NGA Vice Chairman Andrew Cuomo, Democrat governor of New York, leaders of the association called for an additional $500 billion relief bill to stabilize states and territories, which they say are in “dire straits” from the pandemic-driven economic fallout.

“These continuing losses will force states and territories not only to make drastic cuts to the programs we depend on to provide economic security, educational opportunities, and public safety, but the national economic recovery will be dramatically hampered,” the governors said.

In his interview with Hewitt, McConnell said he would be reluctant for virus relief funds to be used to bail out mismanaged state pension funds.

“You raised yourself the important issue of what states have done, many of them have done it to themselves with their pension programs. There’s not going to be any desire on the Republican side to bail out state pensions by borrowing money from future generations,” McConnell said.