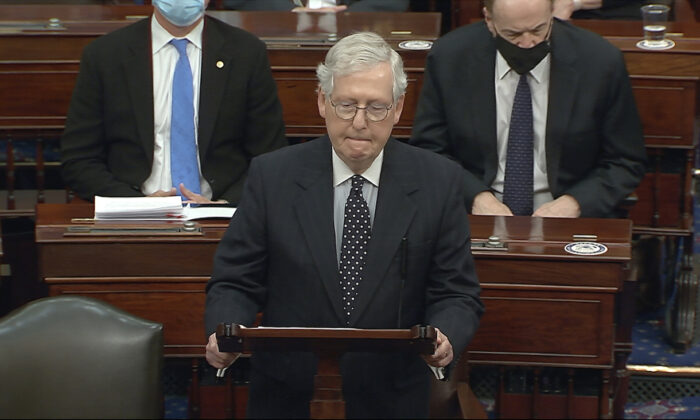 McConnell Ready To Negotiate Senate Power Sharing Agreement, but Warns of Consequences if Filibuster Is Not Honored

Senate Minority Leader Mitch McConnell (R-Ky.) has circumvented the Senate majority leader to obtain guarantees from two Democrat senators that they will vote with Republicans to keep the legislative filibuster threshold. But he warned of a “scorched earth” Senate if the rule is not kept.

With no commitment from Senate Majority Leader Chuck Schumer (D-N.Y.) to keep the filibuster rule, McConnell took the word of two Democrats who have said they will honor the 60-vote filibuster rule, but warned his colleagues what could happen if the pledge is not honored.

“Rather than relying on the Democratic leader, I took the discussion directly to his members. Basic arithmetic now ensures that there are not enough votes to break the rule,” McConnell said, according to his spokesman David Popp. “Our colleague informed me directly that under no circumstances would she reverse course,” another spokesman cited McConnell as saying.

The filibuster requires 60 votes to end debate in the Senate on a bill and vote, and not just a simple majority of 51 votes. It gives a voice to the minority party. McConnell said he has always honored the legislative filibuster, which is different than the filibuster he bypassed for confirming justices, which he dismissed during the Supreme Court nominee confirmation process.

Sens. Joe Manchin (D-W.Va.) and Kyrsten Sinema (D-Ariz.) both confirmed to news outlets that they would not vote in favor of eliminating the filibuster.

“If I haven’t said it very plain, maybe Sen. McConnell hasn’t understood, I want to basically say it for you. That I will not vote in this Congress, that’s two years, right? I will not vote” to change the filibuster, Manchin said in an interview on Monday afternoon.

McConnell warned his colleagues about what could happen if the legislative filibuster is not honored. “If this majority went scorched earth [simple majority], this body would grind to a halt,” McConnell warned. “If the Democratic majority were to attack the filibuster, they would guarantee themselves immediate chaos, especially in this 50/50 Senate,” he added.

“When it comes to lawmaking the Framers’ vision and our history are abundantly clear. The Senate exists to require deliberation and cooperation,” McConnell said.

McConnell reminded his colleagues that the Senate’s process requires consent and agreement to take up business in the upper chamber.

“The Constitution requires the Senate to have a quorum to do any business right now and the vice president does not count. The majority cannot even produce a quorum on their own, and one could be demanded by any senator at almost any time, our committees need a quorum to function as well,” said McConnell.

A quorum is the number of senators that must be present for the Senate to do business. The Constitution requires a majority of 51 senators to have a quorum and start any business in the Senate.

“Technically it takes collegiality and consent for the majority to keep acting as the majority at any time they do not physically have a majority,” McConnell said.

“But there’s no doubt. None. That’s what we’d see if Democrats tear up this pivotal rule, it would become immediately and painfully clear to the Democratic majority that they had indeed just broken the Senate.”

“We’re glad Sen. McConnell threw in the towel and gave up on his ridiculous demand,” said Justin Goodman, a spokesman for the Democratic leader. “We look forward to organizing the Senate under Democratic control and start getting big, bold things done for the American people.”

The minority leader said if the filibuster was done away with it would make laws “brittle” and “reversible” and the laws would change with each majority party.

“So instead of building stable consensus. We’d be chaotically swapping party platforms, swinging wildly between opposite visions. That would guarantee that half of the country is miserable and resentful at any given time. We would have inherited resilient institutions but left behind a chaotic mess.

Schumer’s office did not immediately respond to The Epoch Times’ request for comment about the filibuster and power-sharing agreement.

McConnell said that the filibuster is a crucial rule that was put in place by the Framers of the Constitution for times just as these, when the country is deeply divided.

“We’re in a politically charged period. But when factional fever runs hot and slender majorities are most tempted to ram through radicalism, these are the times for which the guardrails exist in the first place,” he said.