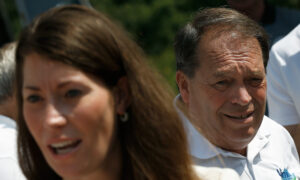 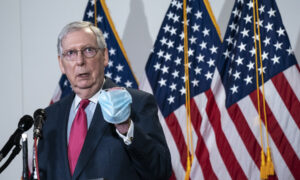 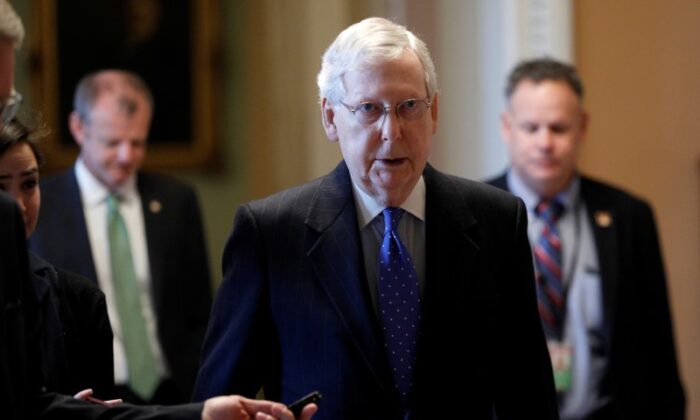 U.S. Senate Majority Leader Mitch McConnell (R-Ky.) speaks to members of the news media while walking into his office on Capitol Hill in Washington on March 17, 2020. (Tom Brenner/Reuters)
AMERICA

Senate Majority Leader Mitch McConnell (R-Ky.) said there is a possibility of a smaller COVID-19 rescue package being passed in the near future as expanded unemployment benefits are set to expire in a few days.

After proposing the HEALS Act on Monday, McConnell and other top Republicans have faced a pushback by both Democrats and the White House over certain provisions.

“Many things around here happen at the last minute. This is only Wednesday, so hope springs eternal that we’ll reach some kind of agreement either on a broad basis or a more narrow basis to avoid having an adverse impact on unemployment,” McConnell told PBS Newshour on Wednesday.

He was asked about a smaller bill being passed to continue the negotiations or a short-term option. “We’re looking at all options,” the majority leader replied.

As for when a bill could be passed, White House chief of staff Mark Meadows told The Hill that “we’re still miles apart on a number of issues.”

“In fact, I would say there are more issues we’re apart on than where we’re closer to consensus,” he said. Mnuchin told the news outlet that Trump is focused on a temporary solution to the $600-per-week federal unemployment benefits.

Both President Donald Trump and Treasury Secretary Steven Mnuchin have pushed for a smaller package to further the extended unemployment benefits and a moratorium on evictions to keep the talks going.

“We ought to work on the evictions so that people don’t get evicted,” Trump told reporters on Wednesday morning. “You work on the payments for the people, and the rest of it we’re so far apart we don’t care. We really don’t care.” Mnuchin added. “As of now, we’re very far apart.”

Following the HEALS Act proposal, Pelosi and Senate Minority Leader Chuck Schumer (D-N.Y.) both attempted to focus on divisions among GOP members, blaming them for the delay in action.

“Yesterday, after putting the Senate on ‘pause’ for three months, and after months of blocking nearly every Democratic attempt to pass legislation related to coronavirus, Senate Republicans finally revealed their long-overdue proposal for the next phase of COVID relief,” Schumer said on the Senate floor Tuesday.

Pelosi, meanwhile, said that Democrats already passed a bill in May, the HEROES Act, which would extend the unemployment benefits until January. However, Republicans have said it contains too many measures that are unrelated to the pandemic, while McConnell on Monday described the package as a “socialist manifesto.”