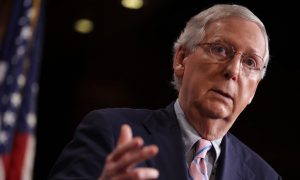 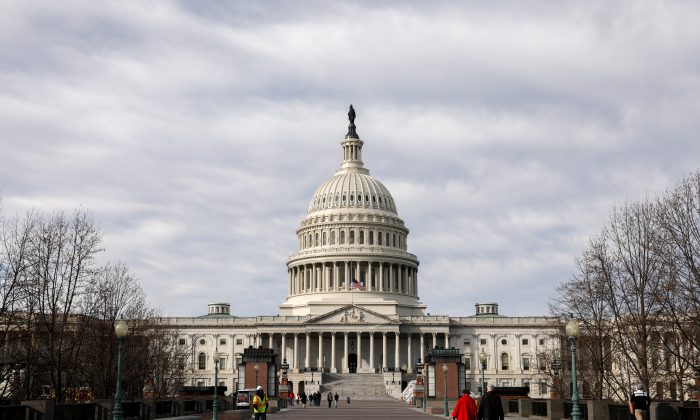 Senate Majority Leader Mitch McConnell (R-Ky.) failed in his first significant legislative test of 2019, on Jan. 8, coming up three votes short of the 60 needed to take up debate on Middle East policy proposals instead of Democratic bills to end the government shutdown.

McConnell wanted the Senate to move to regular business by considering S.1, the “Strengthening American Security in the Middle East Act,” which includes a bipartisan provision protecting local and state governments that refuse to contract with firms or organizations supporting the Boycott, Divest From, Sanction (BDS) Movement against Israel.

The bill also includes military aid to Jordan and Israel, and supports additional sanctions against the Syrian regime of President Bashar al-Assad.

Prior to the vote, McConnell described Democrats’ opposition to his motion as a “partisan tantrum.” The motion failed on a vote of 57-43. Under Senate rules, the majority leader was required to change his vote to “no” in order to move to reconsider the failed motion at a later date.

Democrats, led by Sens. Chris Van Hollen and Ben Cardin of Maryland, argued over the weekend that senators should vote first on a measure approved by the House last week to reopen the government.

With more than 130,000 federal workers and multiple department and agency offices located there, Maryland is among the states most affected by the shutdown.

McConnell insists there won’t be a vote on reopening the government, however, without firm assurances that President Donald Trump will sign it. Trump won’t sign the House bill because it doesn’t fund construction of the wall on the southern border.

Earlier on Jan. 8, Sen. Marco Rubio (R-Fla.) told senators he doubted there would be 60 votes on the cloture motion and expressed bewilderment that the Senate isn’t dealing with any of the “urgent issues” the country faces, despite the shutdown that began Dec. 22, 2018, and enters its 19th day on Jan. 9.

“I don’t think it makes sense to say I am upset about the government shutdown [but then say] I don’t know why we would also shut down the Senate,” Rubio said. “You don’t solve a shutdown with a shutdown.”

The Democrats’ strategy for forcing a Senate vote on funding the government also ran into an unexpected obstacle earlier this week, when Sen. Bernie Sanders (I-Vt.) and Rep. Rashida Tlaib (D-Mich.) put the anti-BDS provision in S.1 at the center of the debate instead of the government shutdown.

Sanders on Jan. 6 blasted McConnell and Senate Republicans about S.1, tweeting that “it’s absurd that the first bill during the shutdown is legislation which punishes Americans who exercise their constitutional right to engage in political activity. Democrats must block consideration of any bills that don’t reopen the government. Let’s get our priorities right.”

Tlaib, a BDS supporter and one of two newly elected House Democrats who are vocal Muslim advocates, responded, saying:

“They forgot what country they represent. This is the U.S. where boycotting is a right & part of our historical fight for freedom & equality. Maybe a refresher on our U.S. Constitution is in order, then get back to opening up our government instead of taking our rights away.”

Rubio, one of the prime sponsors of S.1, blasted back at Sanders and Tlaib on Jan. 7, accusing Tlaib of anti-Semitism:

“This ‘dual loyalty’ canard is a typical anti-Semitic line. #BDS isn’t about freedom & equality, it’s about destroying #Israel,” in one tweet, followed by another minutes later, arguing the BDS Movement has significant support among Senate Democrats:

“The shutdown is not the reason Senate Democrats don’t want to move to Middle East Security Bill. A huge argument broke out at Senate Dem meeting last week over BDS. A significant # of Senate Democrats now support #BDS & Dem leaders want to avoid a floor vote that reveals that.”

While spokesmen for Sanders and Cardin didn’t respond to a request for comment, a Senate Democratic aide, who asked not to be identified, said the BDS provision was irrelevant to the shutdown issue.

And a Van Hollen spokesman pointed to his tweet and that of Cardin in responding to Rubio.

“You’re missing the point. It’s not about which bill we’re voting on. It’s about the fact that McConnell has the power to bring up the bipartisan House-passed bills today and end this shutdown and we need to make that the first order of business,” Van Hollen tweeted.

“I’ve worked closely with you on BDS, @MarcoRubio, and disagree with you here. The government #shutdown is a crisis, impacting millions of Americans and our economy. We can’t simply proceed with business as usual. Reopening the govt must be our first priority. #EndTheTrumpShutdown,” Cardin tweeted.

Cardin was one of the initial authors and among eight Democrats who last year co-sponsored the anti-BDS provision now in S.1.

None of the Democrats approached Jan. 8 by The Epoch Times would discuss Rubio’s claim about a contentious BDS debate in their caucus.