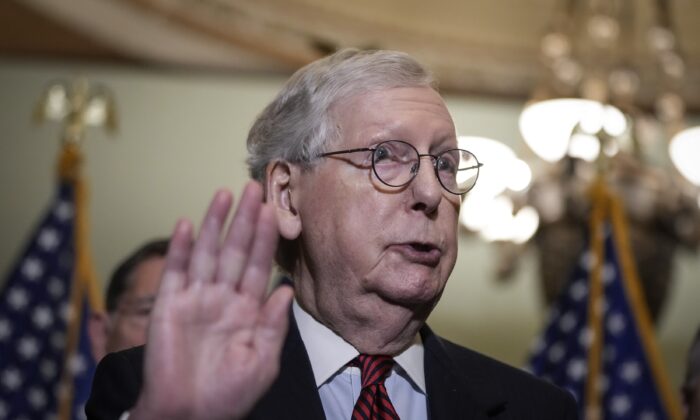 Senate Minority Leader Mitch McConnell (R-Ky.) has been mum about Rep. Liz Cheney’s (R-Wyo.) primary loss to contender Harriet Hageman on Aug 16, in spite of several bids to defend her in the past.

Both McConnell and a representative for the second-ranking Senate Republican, GOP Whip John Thune (R-S.D), refused requests for comment on the matter from Fox News.

Hageman, a natural resources attorney endorsed by former President Donald Trump, defeated Cheney by more than 37 points, taking 66.3 percent of the vote, according to the Wyoming Secretary of State’s Office. Hageman picked up 113,025 votes to Cheney’s 49,316.

Cheney fell into disfavor with the Republican Party and her constituents—70 percent of whom voted for Trump in 2020—for being among the 10 House Republicans who voted to impeach President Trump right before the end of his term, serving as co-chair of the House committee investigating the Jan. 6 Capitol breach, and being among the former president’s most unrelenting antagonists.

The GOP Senate leader voiced support for Cheney after she sided with Democrats in favor of impeachment against Trump.

“Liz Cheney is a leader with deep convictions and the courage to act on them,” McConnell said in a statement to news outlets.

“She is an important leader in our party and in our nation. I am grateful for her service and look forward to continuing to work with her on the crucial issues facing our nation,” he added.

Even in the aftermath of the Republican National Committee’s (RNC) resolution to censure Cheney and Rep. Adam Kinzinger (R-Ill.) for their roles on the Democrat-dominated Jan. 6 Committee, McConnel continued to defend her.

He decried the RNC’s decision, saying the Jan. 6 Stop the Steal rally “was a violent insurrection for the purpose of trying to prevent the peaceful transfer of power after a legitimately certified election from one administration to the next.”

“The issue is whether or not the RNC should be sort of singling out members of our party who may have different views than the majority,” McConnell continued. “That’s not the job of the RNC.”

McConnell chose to stay out of his party’s brawl over the ouster of Cheney from her House leadership position by House GOP back in May.

He reportedly dodged questions when pressed about his stance on the matter, instead stressing his focus on addressing the problems of the current administration.

“As to who’s supposed to be in the leadership in the House, that’s up to House Republicans,” he told Fox News anchor Brett Baier.

“We’re moving ahead in the Senate, focusing on the current challenges we have with this new administration,” he added.

Frank Fang and Joseph Lord contributed to this report.