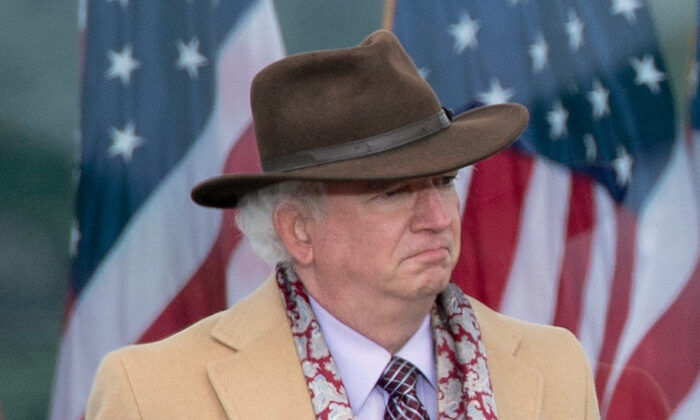 Professor John Eastman at the Ellipse, near the White House on Jan. 6, 2021. (Brendan Smialowski/AFP via Getty Images)
Viewpoints

If John Eastman were a radical leftist activist lawyer like the late William Kunstler, he would be celebrated around the land, as Kunstler was, even getting a cameo in Oliver Stone’s “The Doors.” Instead, Eastman is suffering a McCarthyite persecution simply for advising the president of the United States of the time, Donald Trump, on a constitutional matter during the January 6, 2021 disturbances at the Capitol.

The latest comes in this Los Angeles Times headline, itself inaccurate, “John Eastman, Trump’s lawyer on overturning election, under investigation by California Bar.” In fact, Eastman did not want to “overturn” the 2020 presidential election, but to use the Constitutional process to reassess the election results to see if it was Trump or Joe Biden who won.

Eastman wanted Vice President Mike Pence and the U.S. Congress, who were meeting that day to affirm the actions of the Electoral College, to take a step back and investigate alleged election problems at the state level. That didn’t happen. Instead, Congress chose to affirm Biden as president, and he was inaugurated on Jan. 20.

Of course, that day was the so-called “insurrection” by Trump supporters, some of whom, videos show, were let into the Capitol by the Capitol Police themselves. Then there’s this tweet from Rep. Thomas Massie (R-Ky.) from Dec. 30, 2021, “How many January 6th protesters were actually working for the federal government? In October, I asked AG Garland while he was under oath and he refused to answer. He looked very nervous and worried when I showed him this video in that hearing.”

So far, the January 6 committee has not asked many questions about these disturbing events. Rep. Jim Jordan, (R-Ohio) has promised that, if Republicans take back control of the House this November, one thing they will investigate is the “weaponization” of the Department of Justice under Garland.

According to the L.A. Times article, “Orange County attorney John Eastman is at the center of an ethics investigation into whether he violated laws while advising President Trump on how he could overturn his election defeat in 2020, the State Bar of California said Tuesday. …

“Eastman wrote two legal memos that advised Vice President Mike Pence he could declare that the results in several states were disputed and therefore their electoral votes would go uncounted. Doing so would have injected a new element of uncertainty and opened the door for several state legislatures to recast their votes for Trump.”

Here are the words of the 12th Amendment: “The President of the Senate [the Vice President] shall, in the presence of the Senate and House of Representatives, open all the certificates and the votes shall then be counted; – The person having the greatest number of votes for President, shall be the President, if such number be a majority of the whole number of Electors appointed.”

How did Eastman possibly violate that? What he did was not “overturning” the election or an “insurrection,” but actually following the constitutional process. Why can’t Eastman, or Trump, or anyone suggest Pence and Congress check things out?

LA Times: “The State Bar’s chief trial counsel, George Cardona, announced Tuesday that Eastman has been the center of an investigation since September.

“We want to thank those who took the time to bring to our attention this information, which serves as the starting point for our investigation. We will be proceeding with a single State Bar investigation in which we will continue to gather and analyze relevant evidence and go wherever it leads us.”

Who were those Cardona thanked because they “took the time to bring to our attention this information”?

“‘Lawyers, particularly those who represent elected and appointed officials, have a solemn duty to the public to advise their clients within the four corners of the law, and to ensure that they do not allow themselves to become the tools by which those officials seek to undermine democratic governance,’ the group wrote in a letter.”

Actually, the States United Democracy Center is not a “nonpartisan legal group,” but a far-left activist group. Influence Watch writes:

“Norm Eisen founded the Voter Protection Program by recruiting an ostensibly bipartisan board of prominent individuals and retired politicians. The organization was mentioned in a February 2021 Time article that celebrated a joint campaign by corporate executives, labor union leaders, and Democratic Party operatives who anticipated that in the event of a loss, that President Donald Trump would fight the results of the election, pointing to his criticism of mail-in ballots and other election mechanisms throughout the campaign. The coalition challenged Trump’s push for recounts following alleged delays and discrepancies in the 2020 election results and urged left-leaning advocacy groups and organizers to not stage protests in the days following the election. The article identified Eisen as a recruiter for the Voter Protection Program, an organization created to shut down President Trump’s efforts to contest the election outcome.”

“Following the 2020 election, the States United Democracy Center organized a team of lawyers to oppose challenges to the election results and in January 2021 released a legal memo detailing the organization’s stance that Vice President Mike Pence had no constitutional authority to reject slates of electors.”

By the way, far-left groups like this usually recruit a couple of Republicans like Whitman to seem “nonpartisan” or “bipartisan.” That was easy in this case because Whitman despised Trump long before the election difficulties.

I’ve known John Eastman for 20 years and he has been one of my main sources on constitutional matters. The same, ironically, for Erwin Chemerinsky, another legal source of mine for about as long, who was a sparring partner with Eastman in a long running series of debates. Chemerinsky, currently the dean of the UC Berkeley law school and a Harvard Law School buddy of Garland, now is joining the chorus attacking Eastman.

Chemerinsky told the Times, “John Eastman was the architect of an attempted coup in this country. It’s unlike anything we’ve ever seen in this country, as he fomented the coup, and attempted to disrupt the hallmarks of democracy: the peaceful transfer of power.”

Et tu, Erwin? It wasn’t a “coup,” as I noted above, but a protest that got out of control, and that allegedly might have been encouraged by government agents. Eastman just gave legal advice to the sitting president. And it wasn’t “unlike anything we’ve ever seen in this country,” as there have been numerous protests around the Capitol.

Reported CNN on Oct. 5, 2018, “Nearly 300 protesters were arrested at a US Senate building on Thursday afternoon as crowds of activists descended on Capitol Hill while lawmakers reviewed the FBI’s report on the allegations against Supreme Court nominee Brett Kavanaugh.

“Protesters gathered in the Hart Senate Building atrium after US Capitol Police barricaded the front of the Capitol.

“In a statement, US Capitol Police communications director Eva Malecki said that at about 3:30 p.m., 293 people were arrested for unlawfully demonstrating.”

In sum, the McCarthyite attack on Eastman is being led by a far-left group seeking to shut down any differing opinions on what happened in the 2020 election. Britannica defines McCarthyism as a “name given to the period of time in American history that saw U.S. Sen. Joseph McCarthy of Wisconsin produce a series of investigations and hearings during the 1950s in an effort to expose supposed communist infiltration of various areas of the U.S. government. The term has since become a byname for defamation of character or reputation by means of widely publicized indiscriminate allegations, especially on the basis of unsubstantiated charges.”