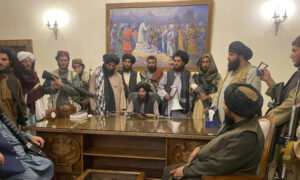 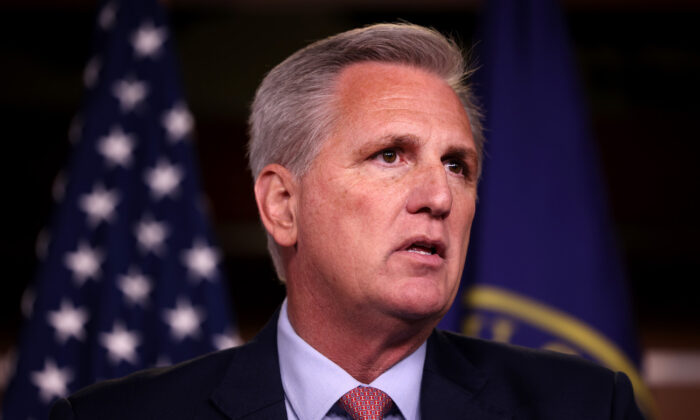 McCarthy Says Will Push for Probes Into Biden’s Handling of Afghanistan: Report

House Minority Leader Kevin McCarthy (R-Calif.) indicated that he intends to push for investigations into President Joe Biden’s handling of the withdrawal of U.S. troops from Afghanistan after the country was swiftly taken over by the Taliban terrorist group.

He told Punchbowl News on Sunday that Congress needs to probe the administration’s handling of the matter, criticizing Biden’s withdrawal tactics and calling it a “mistake that will haunt us for decades.”

McCarthy said that he wants to look at the intelligence assessment that culminated in how Biden executed the pullout of U.S. troops from the divided country.

He said he also wants to understand how the Afghan army was unable to defend against the Taliban after two decades of training led by the United States, which had spent about $90 billion in building up the Afghan security force.

President Donald Trump previously signed a four-component peace deal (pdf) with the Taliban in February 2020, which said that U.S. troops would be withdrawn from Afghanistan by May 2021. Biden said in April that plans had changed, and later in July said that all U.S. forces would leave the country by Aug. 31. Some have speculated that the Taliban dropped its end of the bargain after Biden pushed the date back.

The Taliban, an extremist Islamist organization, declared victory on Sunday over Afghanistan after having spent just over a month to capture vast swaths of the country. Ashraf Ghani, who was Afghanistan’s president since September 2014, fled the country into exile just a day after he said that Afghan government forces could mount a defense. He said he left to ensure there would be no bloodshed.

When asked how he believes the Biden administration could have handled the situation differently, McCarthy told Punchbowl News that Biden should not have been “so public” about announcing when U.S. forces would depart by, and added that the withdrawal shouldn’t have been arranged “during the summer, when [the Taliban are] at their height.”

McCarthy also said that U.S. forces should have destroyed all of their military equipment upon leaving to prevent the Taliban from seizing them. Biden previously said in early July that Afghan forces are “as well equipped as any army in the world.” Army Maj. Gen. Hank Taylor said Monday that he had no information when asked by a reporter whether there were steps taken “to prevent aircraft or other military equipment from falling into the hands of the Taliban.”

McCarthy also said that a “small number of troops” should have been kept to maintain control of Bagram air base—formerly the largest U.S. military base in Afghanistan located just outside Kabul. The Taliban has since taken over the base.

The Epoch Times has reached out to the White House and McCarthy’s office for comment.

Biden said in an address on Monday afternoon that the collapse of Afghanistan “did unfold more quickly than we anticipated.”

He said that Afghanistan’s political and military leaders “gave up and fled the country,” and that the Afghan forces “collapsed, sometimes without trying to fight.”

“We trained and equipped an Afghan military force of some 300,000 strong, incredibly well-equipped [soldiers]—a force larger in size than many of our NATO allies,” he said. “We gave them every chance to determine their own future. We could not provide them with the will to fight for that future.”

The mission in Afghanistan, which spanned nearly 20 years, was designed to take out the al-Qaeda terrorist network that was behind the Sept. 11 terrorist attacks. The United States also killed terror leader Osama bin Laden “a decade ago,” Biden said.

McCarthy in a statement noted that Biden in his address “did not answer any questions about the disastrous troop withdrawal that has failed to protect American citizens, put thousands of American troops in harm’s way, and heightened the threat of terrorism around the world.”

The U.S. State Department has advised that U.S. citizens still in Afghanistan shelter in place and not try to travel to the airport until further notice as troops work on securing the airport for further evacuations.