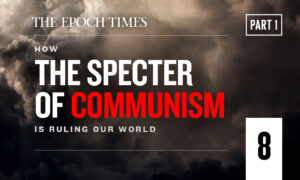 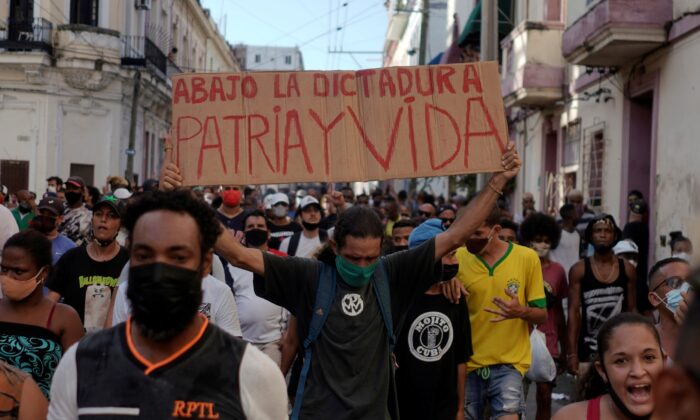 People shout slogans against the communist regime during a protest in Havana, Cuba, on July 11, 2021. (Alexandre Meneghini/Reuters)
Congress

House Republican Leader Kevin McCarthy and 18 other GOP lawmakers issued a letter to President Joe Biden requesting a meeting to discuss how the administration can work with Congress to support the Cuban people as they protest against the communist regime in Havana.

“This is a moment in time when the United States can change the course of human history for the better,” the legislators wrote on Monday (pdf). “The United States is a bastion of freedom and democracy; a beacon across the globe for those seeking to toss away their shackles of communist oppression. We must support our Cuban brothers and sisters as they seek to take control of their future and liberate themselves from the communist malignancy.”

Lawmakers asked Biden for a meeting “as soon as possible” to discuss how the administration can work with lawmakers in Congress “to bring an end to the oppressive communist regime in Havana and liberate the Cuban people.”

“We are concerned that this pivotal moment is being squandered by indecision, bureaucracy, and a failure to lead,” they stressed.

The letter came on the same day that thousands of protesters gathered near the White House and held a mass rally and march to the Cuban embassy, urging the Biden administration to further support Cubans’ fight for freedom.

Mr. President @JoeBiden, my community is begging you to stand with the people of #Cuba🇨🇺 in their fight for freedom! pic.twitter.com/D24p9irCYQ

Protesters were also supporting the mass protests that broke out across the communist-ruled Caribbean island on July 11 when Cuban citizens, at great risk to themselves, took to the streets calling for greater freedoms and an end to the communist regime.

The protests are the largest seen in Cuba in decades. The regime has responded with mass arrests, reportedly taking in more than 500 demonstrators, and sending communist party militants and paramilitary forces to monitor dissidents in cities and towns.

Internet access was cut at the height of the protests, stopping citizens from uploading footage of the mass protests online for the world to see. It is therefore unclear as to how many further protests have played out in Cuba since July 11.

The Republican lawmakers who signed the letter were all tapped by McCarthy earlier this month to serve on his advisory team on Cuba. The group, which includes members from both chambers of Congress, will advise House Republicans on the ongoing protests and the communist regime’s suppression of freedoms in Cuba, as well as to develop policies for U.S. support of the freedoms of the Cuban people. It will also inform Americans about the tyranny imposed by the Cuban communist regime.

Rep. Maria Salazar (R-Fla.) and Sen. Marco Rubio (R-Fla.), two members in the group, both recently accused the Biden administration of having refused to meet with them to discuss options to help dissidents in Cuba.

“We’re very frustrated. We are very upset because we have called respectfully and we have told the Biden administration this has nothing to do with political parties,” Salazar said at a town hall on Fox News’ “Hannity” on July 21. “He will not meet with us.”

“We’ve asked for meetings,” Rubio said at the time. “It hasn’t happened so far.”

Florida Gov. Ron DeSantis, a Republican, also joined Salazar and Rubio at the town hall to call on the Biden administration to take more action. He said that one crucial action would be to help provide internet access to all Cubans.

“The internet access is something we have the capability of doing. We have companies in the U.S. that want to do it, but they need the OK of the federal government,” DeSantis said at the time. “He [Biden] has it within his authority to do that. He can make it happen, and if he’s willing to do that, I think it would make a positive difference.”

But Biden is “basically just sitting there doing nothing” and “leaving these folks out to dry,” DeSantis alleged.

“What’s gonna end up happening, if they don’t get any type of assistance, is the regime will continue to clamp down, and they’ll eventually stamp this out and then they’ll remain even stronger in power, and that will be a huge blow to the cause of freedom,” the governor said at the time.

They were relocated and covered in underground silos, del Marmol said. “I took pictures after the fact and that is the reason we never, ever invade Cuba. Because every single administration thinks … the missiles are still there.”

On July 22, the administration did authorize sanctions against the Cuban Minister of Defense and a Cuban government agency for their role in clamping down on protesters.

“The United States stands with the brave Cubans who have taken to the streets to oppose 62 years of repression under a communist regime,” Biden said in a statement.

The Biden administration also announced that it has been “actively collaborating with the private sector to identify creative ways to ensure that the Cuban people have safe and secure access to the free flow of information on the Internet.”

Secretary of State Antony Blinken on Monday issued a statement expressing solidarity with the Cuban people.

“The United States will continue to support the Cuban people’s desire for freedom and to determine their own future. This joint statement demonstrates that the Cuban people are not alone in their aspirations,” Blinken said. “We are joined by Austria, Brazil, Colombia, Croatia, Cyprus, Czech Republic, Ecuador, Estonia, Guatemala, Greece, Honduras, Israel, Latvia, Lithuania, Kosovo, Montenegro, North Macedonia, Poland, Republic of Korea, and Ukraine.”