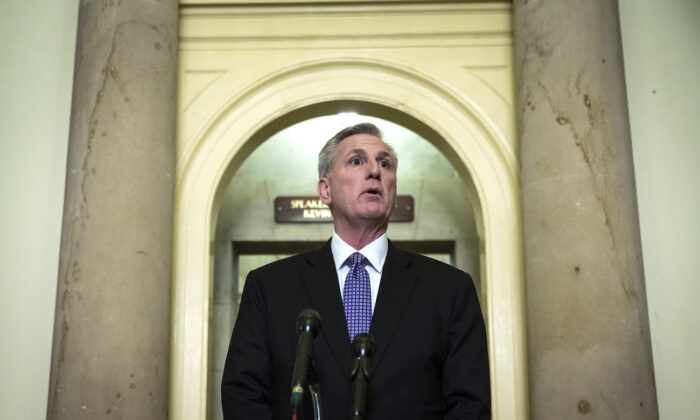 McCarthy has publicly stated that he wants to remove Schiff and Swalwell from the panel, arguing that Schiff has “lied to the American public” and that Swalwell’s past connection to a suspected Chinese spy makes him a security liability.

“I appreciate the loyalty you have to your Democrat colleagues, and I acknowledge your efforts to have two Members of Congress reinstated to the House Permanent Select Committee on Intelligence,” McCarthy wrote in a letter to Jeffries he shared on Twitter. “But I cannot put partisan loyalty ahead of national security, and I cannot simply recognize years of service as the sole criteria for membership on this essential committee. Integrity matters more.”

“As such, in order to maintain a standard worthy of this committee’s responsibilities, I am hereby rejecting the appointments of Representative Adam Schiff and Representative Eric Swalwell to serve on the Intelligence Committee,” he continued.

McCarthy told Jeffries the panel had been misused during the previous two Congresses, which had “severely undermined its primary national security and oversight missions—ultimately leaving our nation less safe.” He added that he was committed to returning the panel to “one of genuine honesty and credibility that regains the trust of the American people.”

As speaker, McCarthy has the power to appoint “all select, joint, and conference committees ordered by the House,” according to the rules (pdf) of the House of Representatives. The House Intelligence Committee is a permanent select committee; Schiff and Swalwell served on it during the last Congress, with Schiff as chairman.

Over the weekend, Jeffries urged McCarthy to accept the return of Schiff and Swalwell to the panel, saying that denying them seats runs counter to the panel’s mission.

“I write today to submit for renomination two eminently qualified legislators to continue their service on the House Permanent Select Committee on Intelligence: Ranking Member Adam Schiff and Representative Eric Swalwell of California,” Jeffries wrote in a letter (pdf) on Jan. 21.

“It is my understanding that you intend to break with the longstanding House tradition of deference to the minority party Intelligence Committee recommendations and deny seats to Ranking Member Schiff and Representative Swalwell,” he continued. “The denial of seats to duly elected Members of the House Democratic Caucus runs counter to the serious and sober mission of the Intelligence Committee.”

McCarthy indicated his intention to remove the pair in June last year if the GOP won the House, and in interviews with media on Jan. 9, said he’d remove Schiff, Swalwell, and Rep. Ilhan Omar (D-Minn.) from their committee assignments.

“Swalwell can’t get a security clearance in the private sector,” McCarthy told AP and Punchbowl, likely referring to reports that Swalwell was targeted by a suspected Chinese spy. “I’m not going to give him a government security clearance. Schiff has lied to the American public. He should not be on Intel.”

According to House rules, no more than 13 members of the same party can be on a panel. Typically, the speaker of the House has given the minority leader the power to choose members for the panel, but this time, McCarthy has not done so, claiming that Democrats set this precedent in the past.

“The Democrats have created a new thing where they’re picking and choosing who can be on committees,” McCarthy told Breitbart News on Jan. 9. “Never in the history [of Congress] have you had the majority tell the minority who can be on committee. But this new standard, which these Democrats have voted for—if Eric Swalwell cannot get a security clearance in the private sector, there is no reason why he should be given one to be on Intel or Homeland Security. He will not be serving there.”

Jeffries addressed this reasoning in his Jan. 21 letter, arguing that the two Republican members were removed from their committee assignments by a bipartisan vote in the House for “directly inciting violence against their colleagues.”

“This action was taken by both Democrats and Republicans given the seriousness of the conduct involved, particularly in the aftermath of a violent insurrection and attack on the Capitol,” Jeffries wrote. “It does not serve as precedent or justification for the removal of Representatives Schiff and Swalwell, given that they have never exhibited violent thoughts or behavior.”

In 2021, the House voted to remove Reps. Marjorie Taylor Greene (R-Ga.) and Paul Gosar (R-Ariz.) from their committee assignments because of social media posts they had made that were considered controversial.

In his letter, Jeffries did not mention that dispute but said he believed there was a lack of consistency, as Rep. George Santos (R-N.Y.), who recently faced criticism for misrepresenting his education and work experience, has been given positions on two committees. Jeffries wrote that this inconsistency “risks undermining the spirit of bipartisan cooperation that is so desperately needed in Congress.”