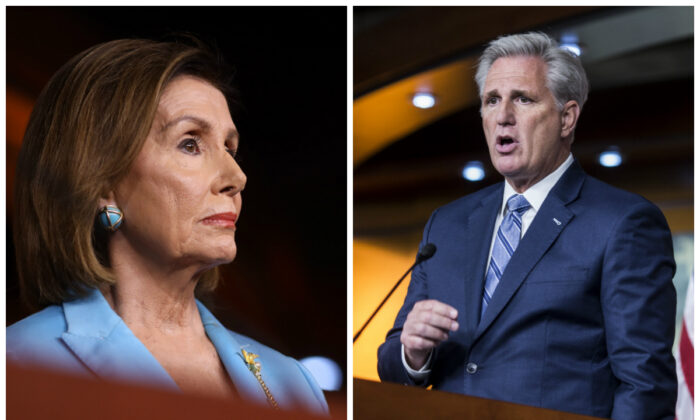 “Unfortunately, you have given no clear indication as to how your impeachment inquiry will proceed—including whether key historical precedents or basic standards of due process will be observed,” McCarthy wrote in a letter (pdf) to Pelosi on Oct. 3.

“In addition, the swiftness and recklessness with which you have proceeded has already resulted in committee chairs attempting to limit minority participation in scheduled interviews, calling into question the integrity of such an inquiry.”

McCarthy noted that there have only been three occasions in American history when the full House of Representatives moved to formally investigate impeachment of a sitting president and that Pelosi has failed to give clear indication of how the current inquiry will proceed.

McCarthy requested a public response to a slew of questions, including: “Do you intend to hold a vote of the full House authorizing your impeachment inquiry?”

He also wondered whether Pelosi would involve her Republican colleagues in each step of the inquiry, including defining its scope, and whether she would provide Trump’s legal representatives the opportunity to attend all hearings and depositions.

Republicans’ leader in the House is calling on Nancy Pelosi to suspend the “impeachment inquiry” until clear rules are established. https://t.co/rmf6q0WmA0 pic.twitter.com/oy3Ripcc69

McCarthy claimed that by answering “no” to any of the questions, Pelosi “would be acting in direct contradiction to all modern impeachment inquiries of a sitting president” and “be denying the president the bare minimum rights granted to his predecessors.”

Pelosi announced the impeachment inquiry in late September. She and Rep. Adam Schiff (D-Calif.), the chairman of the House Intelligence Committee who is in charge of the inquiry, held a press conference on Wednesday saying they wanted the inquiry to be fast.

“We don’t want this to drag on for months and months,” Schiff said.

Schiff accused Trump and his administration of trying to stymie the inquiry and said that any efforts to interfere with the probe “will be considered as evidence of obstruction of justice.”

Lawmakers exploded later Wednesday after a report emerged indicating Schiff was aware of the information in the complaint filed against President Donald Trump before it was filed.

Schiff said that he regretted making a public statement last month claiming neither he or his staffers had spoken to the whistleblower.

A number of lawmakers have signed a motion to censure Schiff for a previous error.

Schiff fabricated part of a transcript of a call Trump made while speaking at a House Intelligence hearing. He later said what he was doing was “in part parody.” Trump has called on him to resign, and at least one colleague has said he should step down from chairing the committee.